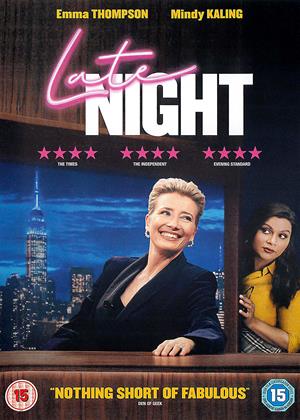 Not a film anyone could get excited about. A terrible start, picks up in the middle and then Goes on a bit too long. Not remotely funny. Characters unlikable and not real. This feels like a film made by teenagers, very basic script. No depth. And not light enough to be enjoyable. Very forgettable like a film that has been made for telly. I would give a miss.

Emma Thompson is excellent playing the jaded, tyrannical talk-show host Katherine Newbury. Her show has become formulaic because her petrified team of male writers fail to come up with anything that will grab the attention of viewers. What is needed is a breath of fresh air, and this arrives in the shape of Molly, an enthusiastic young woman with absolutely no experience of scriptwriting. Molly is only employed as a token woman in a room full of men. Molly gradually shows that she can come up with ways to update and rebrand the show, much against Katherine's instincts. Emma Thompson dominates the film and once again shows her star quality. We enjoyed it - it's got lots of humour and a few laugh-out-loud moments. Not a bad way to spend 97 minutes.

Nothing special but an enjoyable watch - Late Night review by DH

I enjoyed this film about a late night talk show host played superbly by Emma Thompson, having to go through a major reboot of her personal out look on life and broaden her horizons if she is to keep her role.  Enter Molly as a new female writer,  who after some initial reluctance from her fellow male writers starts to shake up the established norm of how the show looks and sounds. With the threat of axing the star and possibly the show,  it becomes the survival of the fittest and who is prepared to make the most changes!

Not quite Prada. - Late Night review by NC

Lots of dialogue. Probably not an ideal role for Emma? Feels very much like a poor copy of Devil Wears Prada, but without the bite, or the tightness.

Maybe less talking and more acting could have made it a bit more cutting edge? Nearly a 2..........

Emma Thompson at her best - Late Night review by PR

Very entertaining film with a fantastic portrayal of the central character, Katherine Newbury , by Emma Thompson.

Mindy Kaling as Molly in support offers a total contrast with  her niavety and some sharply comic put downs.

Not Emma Thompson's best movie in my opinion, bit too much over acting involved and plot a bit weak.

Emma Thompson plays a despicable character who changes near the end of the film. She fights to keep her show. A strong performance.

Although quite watchable not really that enjoyable. The majority of the characters were totally unsympathetic and it was rather predictable and formulaic. There's some very good actors in it and worth watching for that.

I wasn’t sure what to expect from this film - other than another excellent performance from Emma Thompson - but I enjoyed the acerbic humour, which was peppered with a little pathos.

You know what you're going to get! - Late Night review by DB

Thoroughly enjoyable, well acted and believable story. You know where it is going to go, but it is still an enjoyable ride. Emma Thompson and John Lithgow are superb, as is the whole cast. We really enjoyed it, a great choice for an easy watch on a Friday evening after a long slog of a working day.

Late Night is the kind of comedy that feels like it has a lot to say but can’t always find the right words. So rather than dig a little deeper into presenting a picture of progressive ideals and understandings of social change, this picture merely puts in the bare minimum, reducing strife and plight to mere platitudes, one-liners, and hashtags. Sure, it’s well-meaning but how progressive can one film be when it rattles all of this stuff it's for without going that extra mile to show rather than tell.

This dilemma is faced by the film’s troubled late-night talk show host, Katherine Newbury (Emma Thompson). She has been at this game a long time and she has grown stale with her show. Her priorities have clearly shifted from comedic bits to more personal and political issues, more keen to book guests she finds inspirational than promoting the latest movie. Her mind is more on issues than comedy considering the distance she puts between herself and her comedy writers. Realizing she may have a problem with women by keeping them away, she is encouraged to hire a woman for her writing staff. With her job on the line, she bitterly suggests they hire ANY woman for the position.

The lucky new writer is Molly (Mindy Kaling), a chemical plant worker with experience in writing that only goes so far as a company community board. An Indian woman, Katherine figures, would make a great diversity hire in contrast to her all-white male staff. Of course, she’ll be the one to kick some new energy into the program but not after being bashed by her co-writers, nearly being fired and being so down in the dumps she hides under her desk. Her writing at least seems like believable bits for a late-night talk show. One of Katherine’s new segments shifts towards the white savior trope being used in real life, where Katherine puts on the face of a pompous hero to hail a cab for a black guy. “I don’t have to go anywhere,” says the black guy. “It doesn’t matter,” says Katherine to the camera, “that’s what being a white savior is all about.”

That’s some decently funny commentary but it feels like a somewhat lacking bit. Consider how around the same time this film was coming out, talk show host Seth Meyers came up with a brilliant skit that perfectly parodied the melodrama and uneasy racism of white savior movies. That bit was far more well-written and it doesn’t help that Seth Meyers also appears in this film as himself and a host. As I said, this film wants to talk about stuff but feels like it’s always tip-toeing around bigger themes.

A big problem with Late Night is that characters put forth are somewhat cartoonish. For example, Katherine is being replaced by Daniel (Ike Barinholtz), a comedian who seems to specialize in sexist and mean-spirited comedy, where one of his bits involves pooping in shoes. Katherine feels insulted that such a man will be taking her position, fearing her legacy will be trounced by a cruder and louder voice. She also deals with somewhat cautious and confused men. If they’re not being fired as part of a backlash against the male workplace for a man asking for a raise with a new baby born, they’re either cracking jabs at Molly being a diversity hire or cautiously trying not to sound too political or offensive. There’s some more uncomfortable than funny when her co-workers try to apologize with #MeToo and #TransRights.

Late Night has all the right intentions but not a lot of the best lines to keep it moving. Where it shines best is in the performances where Emma Thompson plays a perfectly weary woman who has lost her ways in her strive for more. Mindy Kaling still has that chipper allure but she’s always had that spirit and mostly just turns on the auto-charm for this picture. John Lithgow is at least likable as Katherine’s somewhat devoted and troubled husband and Ike Barinholtz once more becomes the obnoxious villain as he always does. The film finds a few bits and pieces that work when it comes to comedy but whatever greater sense of social commentary it was trying to muster becomes lost in the punchline.