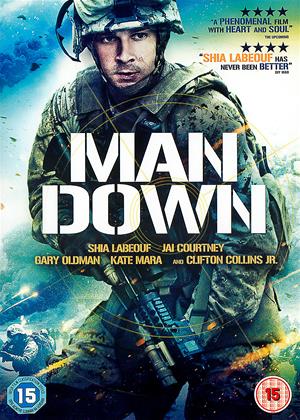 Very under rated movie - Man Down review by AS

This film apparently sold one ticket on its opening day at the UK cinemas. Watching the first half of the film I could probably see why. However, kept watching this movie and then.....boom........what a fantastic film. Very sad but sent a clear message about PTSD on vets in the Iraq and Afghanistan conflicts. The film was cleverly made and resembled the sixth sense film with Bruce Willis. Again you may love or hate this movie.......but overall......a film very under rated.

Disclaimer: I personally find myself very much enjoying every cinematic piece that has Shia LaBeouf in it in one way or the other. Maybe the bloke (or his agent) has a personal taste to pick interesting projects to star in, or maybe it’s just his charismatic demeanor which makes his films ‘differently good’ in comparison to other films of the same type. To this extent, I’m certainly considering Man Down with a healthy amount of bias, so please disregard the superlatives, as well as forget the pejoratives, and try to meet your expectations for this piece somewhere in the middle (a helpful analogy would be that one of professional diving judges). So, without further ado, let’s ‘dive’ right in.

The film starts off slow, seeing Gabriel Drummer (Shia LaBeouf) coming home in the States from a military serving abroad, only to find his country in a post-apocalyptic state where everything seems lost beyond repair. Our protagonist is as confused as the viewers, which makes for a great entry point and creates a thick veil of mystery that adds tons of gravitas to the experience that is Man Down. Soon thereafter, things start to slowly unravel as we enter the psyche of Gabriel during his military interrogation conducted by none other than Gary Oldman’s character Counselor Peyton. In fact, seeing these two actors share the same screen is like watching your two childhood heroes coming together for a tense battle of wits and character, in which a defeat could potentially mean both an emotional disaster and a mental breakdown as well. So, the stakes are set to a very high threshold, and is up to each character to try and break through that mold in order to put some kind of order to their chaotic state of mind. If you have no idea what I’m rambling about, just watch the film and you’ll see.

Another actor worth mentioning is Kate Mara playing Natalie Drummer, the voice of reason in a sea of confusion and an expanding mental mist. She acts as a counterpoint to Gabriel’s burnout and provides both a moral and a physical compass for him to follow (out of the despair and into the normal world). In this light, you’ve probably figured it out: Man Down is an artistic depiction of PTSD and how it affects war vets regardless of country of operation or affiliation. Shia’s raw performance also immensely helps and adds additional importance to what could’ve been a really mediocre film-going experience. The man just knows his craft, and does acting with passion unseen in many current actors on the scene.

All things considered, Man Down is a perfect blend of equal parts thriller, drama, action, and some post-apocalyptic stuff thrown in there for good measure. You don’t want to miss on this one.