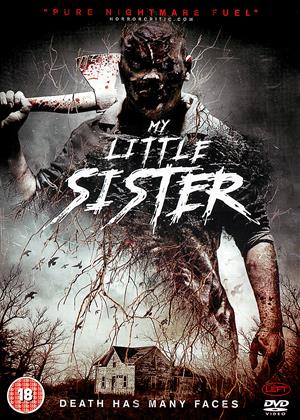 Reviews (1) of My Little Sister

The only real jump scare is as the end credits roll. - My Little Sister review by NP

This is an English speaking Italian horror/slasher film that contains some good moments, but is strangely devoid of any tension whatsoever. There’s a good cast for the most part: Saverio Percudani impresses as the titular killer, albeit a little too groomed for an outcast.

There are elements of Leatherface to the character of Little Sister and his various depictions of lunacy that are so disturbing because of the serene way in which they are directed (by Maurizio del Piccolo, Roberto del Piccolo – Piccolo also wrote). It turns out – in a spoiler – that the killer is just one of a family of mentally unstable untouchables.

Quietly effective, it is true to say that only real jump scare is at the end, when without warning, the death metal end theme music kicks in as the credits roll. My score is 5 out of 10.

My Little Sister is an Italian slasher film about someone named ‘Igor’ who goes out of his way to murder people. This ‘Igor’ guy wants to abduct innocent campers and shred their faces off to make masks. The film abounds with some decent amounts of gore, female nudity, stupid characters running for their lives, and a mysterious woman in the woods that has no impact on the plot whatsoever. It’s full with clichés, things we’ve seen 1000 times before, and stuff that generally turns your brain into a mush, and I’m not saying that in a good way.

The film starts off in a basement, immediately showing the killer and preventing any suspense from developing right there at the start. This killer guy is preparing to have his victim (Sofia Pauly) face collected while she screams in agony knowing what awaits her mere moments away. Meanwhile, another unsuspecting couple is camping out there and having a great time and looking for the missing people in the basement. Eventually, the two of them meet, and you can guess what happens next.

My Little Sister also introduces the stereotype of the creepy old man named Ben (played by David White), who expository narrates the origins of the killer. This killer guy, despite being named ‘Igor’, is also known as – get this – ‘Little Sister’ (???); moreover, ‘Little Sister’ is also fond of hacking and slashing through people to satiate his appetite for something that isn’t quite apparent in the film. Finally, the killer also has the unnatural ability to travel through time and space and transport itself whenever it wants without it being seen by its victims. This is why he always manages to catch up, despite taking his time during each chase. And not onto the filmmaking details.

My Little Sister features the plot of every major horror franchise in the last 40 years, including ‘Texas Chainsaw Massacre’, ‘Friday The 13th’, ‘Wrong Turn’, and couple of other which I would not name to preserve their dignities. Furthermore, the acting is very amateurish and wooden at times, and if it weren’t for the screaming and slashing it would’ve probably ended up being even worse. The sets are passable, the music is below-average, the costumes and effects are surprisingly decent, and the cinematography is, again, barely average. But all of that doesn’t matter in a film if the story is good, which, in this case – is everything but that. My Little Sister has one of the most predictable stories ever put to screen, and this comes as a surprise to no one since the film “borrows” the storylines from all major horror/slasher franchises in recent years.

Finally, if you happen to be fond of cheap-slash-laughable hack n’ slashers that border on the unintentionally comedic, then My Little Sister would be something to seriously consider watching.