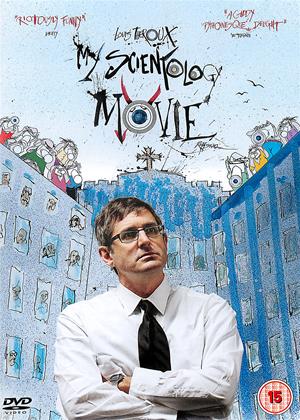 Reviews (2) of My Scientology Movie

Give a Scientologist enough rope... - My Scientology Movie review by Count Otto Black

Documentaries about someone who flatly refuses to cooperate with the filmmakers in any way are always problematic, and this is a film about a huge organization worth billions which not only won't cooperate, but actively tried to prevent the movie from being made. No wonder it was in development hell for 20 years. This of course means that the nearest we get to penetrating the secretive world of Scientology is Louis Theroux pointing at a peculiar fake castle some distance away behind a forbidding barrier of razor-wire and saying "That's where it all happens." And later in the film, elaborate measures are taken to try and prevent him from even standing outside the fence looking in!

Since no Scientologists at all, let alone senior ones, were willing to be interviewed for this movie, actors are used to portray David Miscavage, the extremely controversial current head of Scientology, and its most famous practitioner, Tom Cruise. This doesn't really work the way it's supposed to. We're shown brief clips of the real Miscavage and Cruise speaking on TV, and then the film cuts to various different men reading their lines, sometimes not at all well. No convincing reason is ever given for this, and I was sometimes confused as to the context in which some of the more extreme things said and done by the actors portraying Miscavage were originally supposed to have happened. It feels like a gimmick. It also feels like padding they had to put in there because the man they really wanted to talk to was literally hiding in a castle surrounded by razor-wire.

Also problematic is the extent to which the film focuses on Mark Rathbun, who for over 20 years was effectively the vice-president of Scientology before becoming its bitterest enemy. His relationship with Louis Theroux is prickly to say the least, and it's repeatedly made obvious that he's not being altogether honest about his own rôle in the very bad things he accuses his ex-boss and ex-friend David Miscavage of doing. He's not a person I feel inclined to like or trust. And although it's not his fault, in a film which constantly substitutes actors for real people in a haphazard way, Rathbun's resemblance to Bill Murray is a wee bit surreal.

What makes the film work as well as it does are the constant attempts by Scientologists to interfere with it. If they'd simply ignored it, it would have consisted almost entirely of accusations made by a rather unpleasant man who clearly isn't telling the whole truth. But when all the Scientologists who end up unofficially appearing in the movie seem to be going out of their way to act like members of a completely bonkers religion made up by a tenth-rate sci-fi writer that brainwashes people into behaving as though they're mentally ill, Mark Rathbun's testimony seems a lot more credible. The bizarre manner in which these cult zombies do absolutely everything has to be seen to be believed. If the entire film had consisted of Scientology being given opportunities to shoot itself in both feet and anywhere else you can possibly aim a gun at, and obligingly doing so, it would be a five-star comedy. Unfortunately there are rather a lot of pointless bits you have to sit through before the cultists pop up again and show you how weird, crazy and sinister they are, apparently with no awareness whatsoever that this is bad publicity for Scientology because they've forgotten how reality works. But it's probably worth the price of admission just to see Louis Theroux trying to keep a straight face while barking orders at an ashtray.

Not Louis Best, but Interesting nonetheless - My Scientology Movie review by PN

I normally relish every minute of a Louis documentary but this one wasn't as good, kind of boring. Granted it's a great way to learn about the wackiness of scientology as I didn't know much prior to watching it but that novelty wears thin and it's mostly about him and the ex member who gets quite weird with him at times. Probably not worth watching unless you are interested in the subject matter which is a strange thing to say as you can watch documentaries on anything with Louis and they're normally highly entertaining and eye opening.

My Scientology Movie is a strange concoction of a movie. Strange in the sense of being half satire and comedy that entertains and another half that tries hardly and fails to provide some insight behind closed doors of its Scientology members and their practicing doctrine. Still, John Dower’s piece where he acts both as director and writer (along with Louis Theroux) is not made in vain: he probes, questions and researches this modern cult using tactics that entertain all throughout My Scientology Movie’s running time of 99 minutes total.

When one sees the word ‘documentary’ slapped onto a certain feature, it’s clear that that someone will have indubitable expectations previous to watching said feature. And My Scientology Movie fulfills perfectly this criterion, but also adds new flavor by satirizing an organization which we all came to know and laugh at. In that regard, Dower’s film comes more as an exercise in mocking the ‘other side’ before it can be called anything else. And its mocking grows weary in the movie’s final third.

Most (successful) documentaries usually go in without pre-conceived narrative structure and let the flow of their subject to develop in a natural and provocative way. Not scribe Theroux though. He starts with an agenda, and as soon as he’s blocked from accessing the organization, he immediately resorts to fictional means by which he holds an audition for actors to play various roles within this cult. One of which is David Miscavige, and the other, well, you probably know Tom Cruise’s unsuccessful venture within the church of Scientology by now.

From here onward, the film devolves into what COULD’VE been, instead of what IS. Yes, the film delves into a lesser known archive digging up some Scientology recruitment videos, but unfortunately, without a final point to be made.

Furthermore, when you have your screenwriter become the star of the show, you just know something’s not quite right. Louis Theroux runs around and tries to infiltrate the organization he’s so fond in revealing its dark secrets – only to be stopped by a wire fence and cameras that detect his movement. He then proceeds to extrapolate that this organization has something to hide. You don’t say, Sherlock.

My Scientology Movie is by no means a failed attempt of revealing all misdeeds done by the church of Scientology, a rather new phenomenon that took parts of America by storm. But it’s also not a ‘true’ documentary in all sense of the word. As much comedy as it comes out of it, for instance when two cameras point to each other in a detective manner, Dower and Theroux’s feature falls short on several fronts – similar to how Michael Moore’s documentaries usually play out in the end.

And just like Moore, My Scientology Movie does entertain, but by no means document anything we already didn’t know.