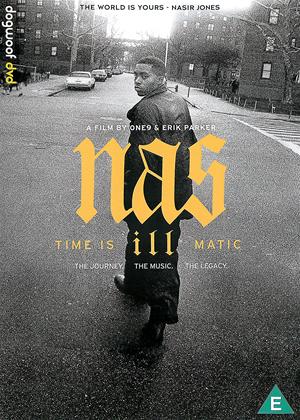 Reviews of Nas: Time Is Illmatic

Music documentaries always give an interesting look into the mind of the singer - in this case, hip-hop personality Nasir bin Olu Dara Jones (stage name Nas). It has been twenty years since Nas released his iconic album ‘Illmatic’, but it has far from lost its appeal. For me, I was not aware of any of the importance of this album, and am still surprised by its continued popularity.

This film examines the meaning and work that went into the creation of Nas’ 1994 album ‘Illmatic’. It looks not only at Nas, but at the societal affects, and how it has continued to impact people over the years. It does all this using old interviews, new interviews, music videos, and concert footage.

For the most part, I think this film would only be interesting to those that are fans of Nas or this genre of music. The positive of this film is also its negative: it focuses heavily on Nas and not on the whole hip-hop movement. We see the impact he had on the genre, but less of what impact the genre had on him, and the work that others were doing at the time. I understand this is under a time constraint and that Nas was the ‘lead’, but it still would have been more comprehensive and educational.

We get to see some interesting interviews from music professionals, family and friends. No interview seems unnecessary, and they all help to form the broadest possible picture.

This is the feature directing debut for graffiti-artist One9, and he does a good job. He does not tell the story chronologically, and lets the emotion take you along.

The film does a good job of going from interview, to past music video, to concert footage. It is not choppy and you feel the flow.

Obviously music is going to be a big part of this film, and they do a good job of not making it feel crammed in. It is all about this album, and it explores it nicely.

This film has received overwhelming positive reviews. It is loved by critics and audience goers alike, and it is hard to find a bad word against it.

Hip-hop has a large and loyal following, especially concerning its ‘original’ personalities. Whether you are a new fan, or one who used to listen to Nas from his beginnings, this film should keep you happy.

Run-time is a little over an hour, and it is an entertaining theme, so you won’t be bored.

I give this film three out of five stars because, while it does a good job of detailing the life of Nas, I don’t feel that it would stand among other notable documentaries. I also don’t agree with calling everyday people like this ‘legends’, but he’s an interesting man.

I recommend it, even to those who have never experienced this hip-hop world.