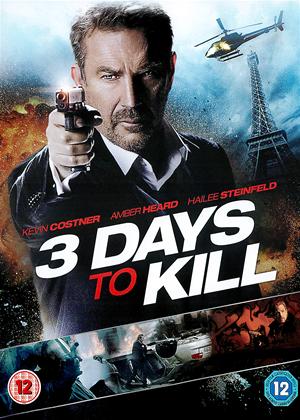 A waste of just under 2 hours of my life that I'll never get back. It's awful. - 3 Days to Kill review by RP

Well, that's wasted just under 2 hours of my life that I'll never get back.

If you sit back, switch off your brain and let it wash over you, you might think this is a half-decent action film. But it's not. It's awful. In fact it's a dreadful, soppy / sloppy over-American film, with a ridiculous plot, awful script, too much gunfire, too many fights / accidents / falls with the 'hero' receiving nary a scratch or bruise, set in a strange version of Paris where no-one speaks French.

Kevin Costner plays an ageing CIA agent who finds out he is dying, travels to Paris to meet his estranged wife and make it up with his daughter he has neglected. He is re-recruited for another mission, has many meetings with daughter + boyfriend, teaches her to ride a bike, and has assorted shoot-outs and car chases during all of which he has lengthy phone conversations with his daughter. It's soppy, it's silly, it's very American - and it also has Mr Wooden Costner, who to his credit, has dropped his annoying, dislikeable nasal drawl for a deeper, gravel voiced effort.

I don't know where scriptwriter Luc Besson dragged this ridiculous storyline from - although the soppy aged agent / daughter / Paris elements remind me of a very, very bad version of 'Taken'.

This is without doubt one of the worst films I've seen in the last year. But unfortunately I have seen even worse, so I'll have to give it an over-generous 2/5 stars.

Nothing to set it apart from similar films. - 3 Days to Kill review by CP Customer

Kevin Costner trying to do things which a man half his age would not find easy. Good car chase, some funny bits, but nothing special.

In recent years Kevin Costner has virtually disappeared from the public consciousness apart from a couple of excellent supporting roles in films like The Company Men and Man of Steel. The latter film had the unexpected effect of jettisoning him back into the public eye and because of it we can expect a full slate of movies starring the famous actor director and from the look of this latest excursion its going to be good to have him back.

3 Days to Kill follows seasoned killer Ethan (Costner), a CIA agent facing retirement when after a mission he discovers he has terminal cancer. When he returns to Paris to reconnect with his estranged daughter Zooey (Hailee Steinfeld) he is introduced to Vivi (Amber Heard) who offers him an experimental treatment in exchange for a few days of his time and skills. However what starts out as a way of saving himself and rejoining his family could well destroy the tenuous links he has to them in the first place.

While the film is working from a story designed by the perpetually inconsistent Luc Besson it has a great sense of humour as Ethan must contend with dealing with his daughter and take on a group of international terrorists in various stages of male pattern baldness. The way director McG meshes family drama and covert ops is reminiscent of the wonderfully playful Red 2. Costner plays into the films sillier aspects and Heard is more than willing to have a laugh.

Steinfeld however is the glue that keeps this film together playing the straight laced Zooey who brings enough child like enthusiasm without becoming a caricature and also understands the conflicts that make Zooey a convincing and realistic teenager. It’s the twisted family dynamics in 3 Days to Kill that make the movie more than the stereotypical Besson run and gun tale and the relationship between Costner and Steinfeld works in an unexpected but utterly compelling way.

Thats not to say the film isn’t filled with the same kind of nonsensical, clunky dialogue that Besson has been embracing ever since The Fifth Element but it all seems to fade away once the film really gets into its main story as watching these two disparate souls bond, despite their differences and Ethan’s mistakes, is cathartic and ultimately endearing.