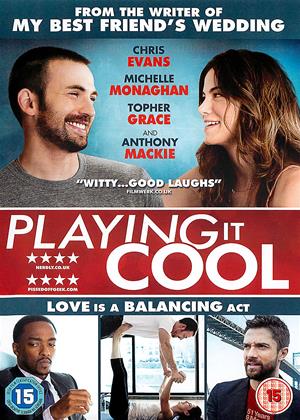 Synopsis:
'Playing It Cool' is a smart, sexy and very funny modern comedy with a star studded cast guaranteed to make you believe in true love. Chris Evans plays a screenwriter who wants to write action movies, but his agent is insisting he first writes a romance. The only problem is that he doesn't believe in love and hates the idea of commitment. When he meets Michelle Monaghan he thinks that she may be the one to change his opinion and help him write about love, until he finds out she is engaged. Can he overcome his fear of commitment and lack of romantic experience to win her heart?
Actors:
Chris Evans, Michelle Monaghan, Topher Grace, Aubrey Plaza, Luke Wilson, Martin Starr, Anthony Mackie, Ioan Gruffudd, Philip Baker Hall, Patrick Warburton, Gerry Bednob, L. Peter Callender, Velina Brown, Ryan Cover, Peyton List, Kyle Mooney, Sarah Dumont, Shelly Slocum, Matthew Morrison, Ashley Tisdale
Directors:
Justin Reardon
Producers:
Nicolas Chartier, Craig J. Flores, McG, Mary Viola
Narrated By:
Chris Evans
Writers:
Chris Shafer, Paul Vicknair
Aka:
A Many Splintered Thing
Studio:
High Fliers Video Distribution
Genres:
Comedy, Romance

Reviews of Playing It Cool

“...and God help you if you use voice-over in your work, my friends. God help you. That's flaccid, sloppy writing. Any idiot can write a voice-over narration to explain the thoughts of a character.”

Those were the words of an actor portraying screenwriter Robert McKee from the film Adaptation (2002). It’s a hilarious bit of dialogue in that it breaks up the internal voice-over of Nicholas Cage. There was a film that took the ideas of screenwriting and used them in a means of both anxiety-driven drama and satirical jabs at being a writer. But Playing It Cool treats its screenwriter characters as quirky ingredients in a standard romantic comedy. Few of the characters that spend their lives buried in writing movies realize that they’re trapped in a romantic comedy. It’s especially maddening when you consider our protagonist is trying to write a romantic comedy.

We never learn the name of Chris Evans’ character in this picture - simply referred to as Me from his narration. The girl he is after for the entire picture is referred to as Her (Michelle Monaghan). The fact that they’re never given proper names is either due to the lazy nature of the script or a subtle commentary at the pointless names in romantic comedies. As far as the audience is concerned, it’s just Chris Evans gunning after the heart of Michelle Monaghan. Their character names are meaningless.

This Chris Evans character is a screenwriter determined not to fall in love ever since his mother left him at an early age. He hates love and rejects all women that throw themselves at him. What a terrible life! He tries to bury himself in writing action movies, but his latest assignment is a romcom. Facing writer’s block for his loathing of love, he soon finds Michelle Monaghan as his soul mate. They both laugh at love and agree to be friends. But, oh no, she’s getting married! Time to confess that old true love by crashing the wedding.

In between Evans’ awkward and embarrassing attempts to woo Monaghan by pretending to be a charity worker, he spends his time relaxing with his screenwriter friends (Topher Grace, Luke Wilson). While they bicker over Evans’ love life and what they’re currently writing, they take in recreation of firing ranges and bowling alleys. As likable as they appear with their banter, they are also blind to Evans’ romance that is going down a predictably cliche route. More bad writing or commentary on the ineptitude of screenwriters to read people?

The movie at least musters up enough creativity for a visually pleasing experience. Evans’ mind envisions every story with himself in the lead and Monaghan as the romantic interest. His pal relays what he saw on a Korean soap opera and Evans can’t help but insert himself. He dad tells him about the tale of how he met his wife and Evans sees himself once more. It’s strange, but these sequences do offer a refreshing change of pace with unique visual interpretations through the mind. I just wish Evans didn’t have to keep explaining the self-insertion with nearly every imagination scene.

While Chris Evans and Michelle Monaghan have plenty of heart and snark, I wish they had more smarts. Despite some unique editing and likable characters, director Justin Reardon can’t quite shake the old romcom tropes that hold this picture back from being something original. If it just had a more self-aware nature or better plot to play with, the movie wouldn’t be as groan-worthy as when Evans makes the obligatory bolt towards the church to stop the wedding.