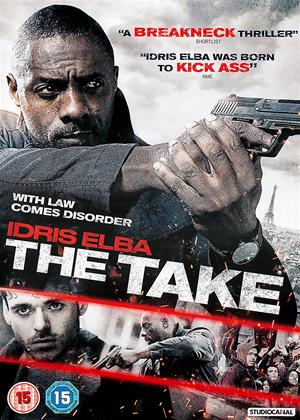 Idris Elba plays a maverick (surprise, surprise) CIA operative in Paris, running roughshod over everyone he meets. He drives too fast and walks with a street swagger. The character is a joke and Elba’s off-hand delivery of admittedly dreadful lines also fails to convince. He’s still playing Luther rather than a CIA operative – not a great calling card for the part of James Bond for which he’s always touted. The dialogue is dire. He’s soon ‘off the reservation and on his own’. Natch. The filmmakers seem to think that Dirty Harry still works in the 21st century.

On the plus side the film has some good things going for it. Richard Madden makes a resourceful pickpocket caught up in a bomb plot and Thierry Godard from French TV’s Engrenages (Spiral) makes a good villain. The plot is convoluted and fast-moving and the action is well choreographed and briskly directed by James Watkins, even if the modern curse of rapid editing sometimes makes them difficult to follow. There’s a great rooftop chase and a riotous fight in the back of a careering runaway van. Watched with tolerance, this is an enjoyable escapist film.

Idris is no longer a soft-drink! - The Take review by NC

Had to give this a 3 because is pretty tight fit. Bit like a Bourne thing, without so much megga action shoots. Idris is pretty tough looking, and most of the bish-bash is almost credible. Not quite as OTT as say Transporter super-martial.

Films always trying to do the odd couple thing with guns. Works better than quite a few have seen. De Niro was good at it at one end, and Crowe was lousy at it at the other........but is in the majority group alas...........

The Take promises a good take on thrillers while putting Idris Elba forward as the main protagonist who is not shy to fire some guns in the process of mowing down some baddies along the way. And what’s more important, The Take succeeds in succeeding Jason Bourne and double-0-seven as the go-to action hero of the 21-st century, so far that is. Idris as Sean shoots his way through problems, but also utilizes his brain to solve mastermind-designed puzzles that no other undercover agent has the computing power to do. So, Sean Brier blows Bond out of the water any day of the calendar year.

The film starts off by ‘cloaking’ its main figure, and introducing a certain Michael Mason instead; this serves two purposes: veiling a hint of mystery over the audience and providing a twist where no one saw a twist coming. One day however, small-time crook Michael steals a bag full of nothings, and upon his realization – throws it in a nearby garbage can. Little did Mason knew, the contents in the bag were rigged with explosives which triggered shortly after his actions occurred. Did Michael planned this all along, or did he just happen to stumble in the wrong neighborhood, at the wrong time?

Then enters Idris Elba the scene: he is charismatic and shakes buildings with his deep voice, while his skills as a CIA agent make him the perfect hero for solving seemingly unsolvable crimes. In this case, it was a conspiracy theory Sean Briar was set to unravel, and oh boy did he delivered. His character is so well written that makes other dudes cartoon caricatures, no less. Andrew Baldwin and the director himself James Watkins had outdone themselves in any way imaginable. And that is not an exaggeration, since their previous titles include Eden Lake, The Woman in Black and the Descent 2 and none are as aggressively poignant and to-the-point as their latest collaboration.

Now, don’t get me wrong: the film has its flaws and they’re mostly in the form of awkward exchanges between the two mains, which prove more comical than expository (a good thing perhaps?) Furthermore, events unravel in the midst of Bastille Day, involving a small-time crook, a CIA agent in pursuit and your typical fill-in-characters who add nothing to the plot whatsoever. And it’s damn effective, since the chemistry between the leads is unparalleled. Elba for the win!

A conclusion would only graze the surface of why you must see The Take: it’s bold, brave and in-your-face thriller that both thrills and excites even the most stone-skinned nihilists of the modern day.