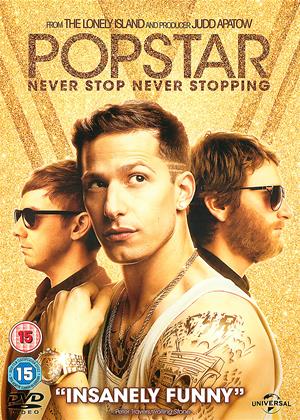 This one is a little difficult to value correctly: on one hand, it’s an American-market oriented satire which’ll (probably) become irrelevant in few years’ time with its dated pop references; on the other, it presents itself as comedy that nevertheless is capable of eliciting few chuckles here and there, notably present in Andy Samberg’s over-the-top subversive mannerisms with which he propels the whole experience forward. And while probably Popstar: Never Stop Never Stopping will find its appeal in the younger demographics - that never stops it (get it) from becoming a thing on its own.

Upfront, Akiva Schaffer and Jorma Taccone’s lovechild looked eerily similar to the likes of overly dumb comedies aimed at no one in particular. However, Popstar: Never Stop Never Stopping avoids equating with such cinema trash by having a screenplay that doesn’t just spoof a famous scene, then proceeds to apply ‘comedic’ changes upon it in a well-known formula that produces nothing more than masterpieces like Disaster Movie, Meet the Spartans and the like.

Fortunately, albeit being derivative at times, this one is a little different.

Looming large over Popstar is another feature called Spinal Tap: to this extent, Popstar largely plays like this generation’s Rob Reiner masterpiece without directly lifting scenes and jokes (although, it’s heavily inspired to a large extent) from it.

The characters are both daft and unpredictable, throwing immature tantrums whenever things go south. This is especially true when Samberg’s Conner reads the review of his newest album in Rolling Stone, after which he is baffled and proceeds to acts accordingly.

Lot of the jokes however extend too much at times to the point of it no more being funny. This is not to say the comedic timing is off, but rather mismatched with what the audience would expect from such feature. Also, nods aimed toward different comedies (like that of Ace Ventura) just fall flat on their face. Seal scene is pretty entertaining though.

Ultimately, Popstar: Never Stop Never Stopping is an ok-ish film which succeeds on several fronts, but also fails on many. Also, with cameos (some would call them ‘supporting roles’) from Sarah Silverman, Tim Meadows, Maya Rudolph, Joan Cusack, Imogen Poots, Chris Redd, Will Arnett, Chelsea Peretti, Eric André and Bill Hader, you would think The Lonely Island’s trio would at least aim from something more than just cheap chuckles and laughs, and you’d be wrong.

And finally, a mockumentary like Popstar works only in groups with loud friends, who have to constantly remind you how funny this movie is.