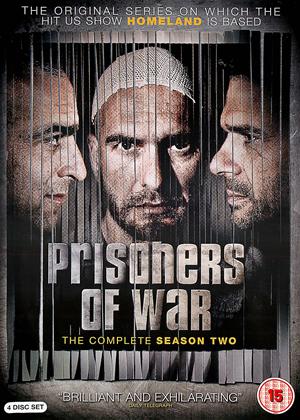 Synopsis:
Picking up where season one left off, we discover that Amiel Ben Horin is not only alive, but he has been living as a Muslim in Syria, a leader in the terrorist organisation that brutalised him for years. Has he turned? In these emotional, tense and densely plotted episodes, former prisoners of war Uri and Nimrode and their families continue to pick up the pieces of their lives; Amiel, now known as "Yussuf", struggles with his identity and allegiances; a lifelong pursuit of vengeance comes to a climax; and a top secret intelligence operation known as Operation Judas is put into motion, with potentially devastating consequences.
Actors:
Yaël Abecassis, Mili Avital, Sendi Bar, Assi Cohen, Salim Dau, Yael Eitan, Adi Ezroni, Ishai Golan, Hadar Ratzon Rotem, Guy Selnik, Yoram Toledano, Jonathan Uziel, Gal Zaid, Shmuel Shiloh, Yousef 'Joe' Sweid
Directors:
Gideon Raff
Producers:
Liat Benasuly
Creators:
Gideon Raff
Writers:
Gideon Raff
Studio:
Arrow Films
Genres:
TV Dramas, TV Political
Countries:
Israel

Reviews (1) of Prisoners of War: Series 2

A cross between a soap opera, a thriller and a psychological drama. Great stuff! - Prisoners of War: Series 2 review by RP

It's in Hebrew with subtitles, but once you're over that minor hurdle you're in for a treat.

You really need to watch Season 1 first as that sets the scene - three Israeli soldiers captured in Lebanon, held prisoner or 17 (!) years, then released - two (Nimrod and Uri) alive, one (Amiel) dead. We follow Nimrod and Uri as they try to come to terms with their much changed families, with society, and with the torture they have undergone. And in the final episode they find discover that their supposedly 'dead' friend is in fact alive...

Season 2 continues to follow Nimrod and Uri through their changed family relationships and also focuses on the hunt for Amiel and the attempts to bring him back to Israel. Has he been converted to Islam? Is he really now the leader of a jihadist organisation? And in the process we unravel the threads that so closely link the characters and their captivity.

'Prisoners of War' is a cross between a soap opera, a thriller and a psychological drama. While there is certainly more action here than in the earlier Season, it's all fairly slow moving. There are tense moments, but don't watch this if you're looking for fast moving action. Do watch it if you're looking for an intense and personal introduction to the inner tensions in Israeli and Syrian society.

[Aside: it was made before the uprising in Syria against President Assad, the civil war in the country, and the rise of IS/ISIL. I guess this is one of the perils of basing a fictional series against a background of current events...]