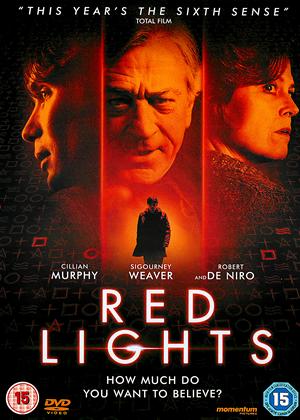 Poor Cillian Murphy. Here he is, a good actor sandwiched between two better actors, Sigourney Weaver and Robert De Nero. And he gets beaten up as well, but he does get to have the last word in a supposed 'twist' at the end. And once you've been told by a friend (as I was) "There's a great twist at the end" you'll find the 'twist' so obvious that it isn't great at all, but obvious - and very, very silly. Ooops - now I've done it :(

Like the tired football cliché, this is a game of two halves - first half good, second half poor. The (silly) story goes like this: Weaver and Murphy play two academics who play, ever so seriously, at debunking psychic fraudsters. Then Weaver - who by this time has fleshed out her character quite well - dies, leaving Murphy to carry the second half of the film alone. Except he's not alone, he's on screen with renowned psychic De Niro - who as we know has a powerful on-screen presence and over acts (as always, these days). So Murphy comes off second best - until the very end.

Apart from the silly story, I'm not aware of any reputable British university that has two whole departments devoted to so-called parapsychology, nor that offer lectures in psychic fraud, nor any British demand for sell-out theatre tickets for on-stage psychic shows - but maybe it's different in the US, or Canada + Spain, where this was filmed. The whole backstory seemed unreal and I just didn't feel comfortable accepting it.

I last saw Sigourney Weaver in the naive and simplistic 'Avatar' where she played a determined scientist. Here she plays a determined scientist. I last saw Robert De Niro in the pretty average 'Limitless', where his role is best summed up by the name of his character, Carl Van Loon. Here he plays Simon Silver, a psychic. Now, if he were a real psychic perhaps he'd be able to pick roles that enhance his excellent reputation rather than reducing it.

Having said all that, the film does have a certain atmosphere, it's slightly spooky (but no real scares, shocks or thrills) and I quite enjoyed it - but it's pretty average stuff. See it if you want to be entertained by some mild piffle masquerading as a thriller. 3/5 stars.

I found this film rather mediocre and, in, parts, rather boring although Sigourney Weaver is excellent, in my opinion. The so called twist at the end, was expected and although I'm a great fan of De Niro, I found his performance unmemorable and poor.

Is there anybody there? - Red Lights review by NC

Should maybe be better, maybe a 4, taking the acting content involved. Bob De takes third place to be fair. Cillian getting better all the time.

Mediocre and predictable but holds the attention. - Red Lights review by TR

De Niro's role suited him and he did well rather than phoning it in. This is a bit too full of stock references to the paranormal, so it became more like an Idiot's Guide, but the story was just about discernable under all the cliche, and I was caught out by the twist at the end.

My experience as a film critic and journalist has made me aware of the rising trend in psychological horror movies at the moment, the genre alone has increased in popularity quite significantly thanks to blockbuster successes such as Paranormal Activity yet there is a new element that is becoming more and more popular and is present in this most recent Sigourney Weaver movie Red Lights.

Weaver plays a University psychologist who has made a name for herself by disproving the abilities of so-called psychics and mediums, however when the acclaimed psychic Simon Silver (Robert De Niro) re-emerges from obscurity after thirty years her assistant Tom (Cillian Murphy) is intrigued when his mentor refuses to investigate the strange death of one of Silver’s biggest critics at a show decades earlier.

This follows the clear narrative arc that has surfaced in this recent influx of psychological horrors where the intellectuals and the sceptics find their opinions violently shaken and ultimately changed through their own experiences with the supernatural. With this in mind it is fairly clear where the rest of the story is going. And Red Lights does not disappoint.

Other critics have applauded director Rodrigo Cortes for the way in which he has unusually dedicated a large amount of time to outlining the reasoning and background of the sceptic’s side, rather than simply allowing the stereotype to do the work for him. Yet I found this attempt at skewing the audience perspective meandering into narrative over-kill after a while when you simply felt like shouting at the screen as you get the point, you know what’s going to happen and would they just get on with it cause you’re loosing the feeling in your thighs.

This statement isn’t entirely true however as there is an out of left field twist at the end which for me was not only hugely unexpected but also didn’t really seem to fit with the movie as a whole. One can not help but wonder if the reason this genre has become so popular is its predictability; if this is the case Cortes’ attempts to take things from a different angle spoil rather than improve the narrative. If you’re looking for a horror movie with tension and lots of jumps and bumps in the night then Red Lights is both average and disappointing.