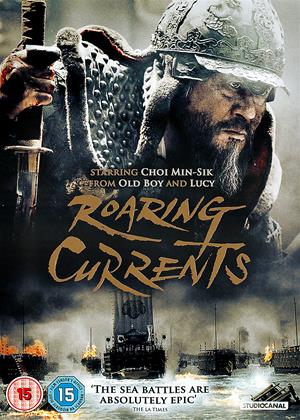 It’s 1597 and the Japanese fleet is invading Korea. They have more than 300 ships while the Koreans have 12, but the Koreans have General Yi and he knows the coastal waters. The brilliantly-realised sea battle has an epic quality reminiscent of Kurasawa films such as Kagemusha. The plot requires concentration at first as the various characters are introduced, plans are made and skirmishes lay the groundwork for later developments. It’s worth the effort.

Backed by a powerful score, co-writer Kim Han-Min directs with panache and complete command of his material, building tension and anticipation in equal measure. The final hour is taken up with the battle itself and it’s a stunner – a visceral spectacle of pounding action bolstered by convincing special effects. It’s bloody, exciting and gut-wrenching, packing such a punch that you’ll be exhausted at the end of it.

Min-Sik plays Sun-Sin a disgraced Korean admiral who is brought back when it seems all hope is lost.

The Korean fleet has been reduced to 12 ships while the Japanese have 300 - everyone (including his captains) are convinced its a lost cause and when their secret weapon The Turtle Ship is sabotaged and burns even he has doubts.

But a mixture of stubburness , a wily cunning and the fact he knows a local strait has a rip tide when given certain conditions can turn lethal.....can he lure the enemy in without them suspecting?

It takes a while to get going and because both sides wear similar armour and the subs don't let you who is Japanese and who is Korean so its a while before you work out who is who.

Once this is set-up the rest of the film is just the battle and although the sequence lasts almost an hour you are gripped throughout. The action whips from one battle bridge to the other and you are in the thick of the canon fire, muskets and the fighting.

To complicate matters his captains all hang back to see how things go so Sun-Sin is on his own on his flagship and is forced to use every trick in his armory.

Mik-Sin plays him as a remote taciturn figure but whose military genius inspires his own men out of their fear.