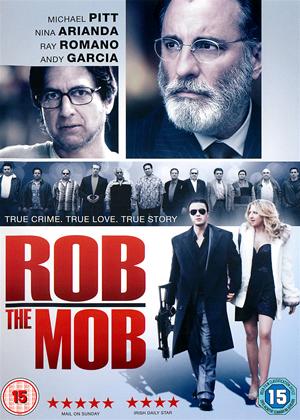 The lead role actors in the film were very good, About a couple who rob from mafia gangs to make a better life for themselves, to move away and get married when they get enough money.

With Rob the Mob, one word that comes to mind, is ‘interesting’. Written by Jonathan Fernandez and directed by Raymond De Felitta, they have delivered a twist on the typical mafia movie. It is a mix of drama and comedy (the title hinting at this), and I have given it a good four out of five stars.

The film begins by following Tommy (Michael Pitt) and Rosie (Nina Arianda). They are a young and stupid couple who soon find themselves in more trouble than they can truly comprehend. Tommy has just come out of prison, and is desperate to start a new life for he and his girlfriend. But doing the right thing does not come easily to the couple. While sitting-in on the trial for the known mobster John Gotti, Tommy hears the address of one of the mafia’s social clubs, and decides to rob it. Not only do the mobsters not have weapons on-hand while there, but Tommy knows they are unlikely to go to the police to dob him in, and that the FBI would surely not care if mobsters are losing money. He figures he can’t lose. Finding a list of further mafia social clubs, the hold-ups keep coming. Will the FBI figure it out? Will Tommy and Rosie have their happily ever after? Or will the mafia reap their revenge?

There are so many remakes and unoriginal stories that are made every year, that it is refreshing to see something original on our screens. The surprising thing is...this is based on a true story! How much of it differs from reality, I do not know, but from those that know the real story, apparently it is pretty close.

The acting was also a positive element of the film. Michael Pitt and Nina Arianda take the lead roles. You have probably heard their names before or find their faces familiar, but they do not have an extensive film resume. Despite this, they did an excellent job at embodying these crazy characters. They were in good company, however. Perhaps you would not call them ‘veteran’ actors, but the experience of Ray Romano and Andy Garcia probably helped the younger cast. They became the focus of the latter-half of the film, which made it more well-rounded in its story.

While some films give you a clear good and bad guy, others instead choose to make the characters much more complex. Rob the Mob makes the distinction even murkier. Do we root for the young robbers, the mobsters, or the FBI? You may find yourself switching from one to the other.

Online and in-print reviews have been quite positive, agreeing with audiences who have also found it entertaining.

It contains some aspects - swearing, violence, etc. - that make it inappropriate for younger audiences, but uses them less than you would expect from a mafia flick. It does not use them flippantly like we see all too often, and helps to further the story and characters.

Overall a good film worth checking out.