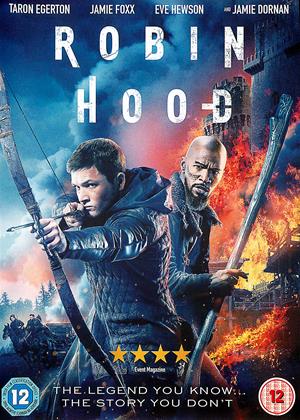 Assassins creed for the Middle Ages, give it a miss! - Robin Hood review by CS

When a film starts with the immortal lines, "If you think you know this story, well think again", you just know it's not going to be able to deliver the goods that it promises and sure enough, this film does not disappoint on that angle! I'm unclear as to whether the makers actually bothered to research the story and myth behind Robin Hood and how the myth came into being, or why it is still so relevant today, but rather than being a new retelling of this classic tale of good vs evil, this just comes across as a bad American smash and grab raid! Whilst presumably set at the time of the Crusades, which is around the mid 13th to 14th century historically, there is very little of historical detail or relevance in this film. It becomes clear very quickly that the makers have decided instead to create a CGI world fit for a computer game, with very modern set pieces reminiscent of Mad Max or Assassins Creed. All the clothing and gadgets are very modern, with the Sheriff of Nottingham looking more like a Nazi in his overcoat and boots, than anything remotely Medieval. It looks like most of the scenes were filmed in front of a blue screen, with the background being added later digitally, in fact the whole film reminded me very much of Assassins Creed and looked more like a computer game than anything. Although the lead is played by Taron Egerton, from Kingsman, I kept thinking of the Hunger Games, because that’s who he looked like and much of the style was similar too! Jamie Fox Must have been really embarrassed, as I’m not sure why his character has been used to promote Islam so much, but there’s no flow or strength to the main characters or their relationship. Numerous and very heavy criticisms are made of the Catholic Church, pointing out their corruption and hypocrisy and quite rightly so too, with the Sheriff saying that they use fear to control the people, which is why they created Hell. But then goes on to talk about Muslims not fearing death for they are assured a place in Heaven. Surely given that all religion is the same in this respect, in relation to hypocrisy, control and manipulation of the masses, Islam should be treated with the same contempt, in the name of equality! The script was really dire and badly written, I’m not sure they would have used such modern terms as Yo Bro way back then and the direction and editing are all over the place. Basically this comes across as nothing more then a sloppy and very heavily edited version of the Hunger Games set in the Middle Ages, with really awful CGI and of course the obligatory setting up at the end for a sequel!

I fell to sleep - Robin Hood review by AB

Really looking forward to this film , but total disappointment .. What shame to spoil a good old fashion story, it really doesn't need updating .. I felt it was political as well .. Would like to see what others think of this film

Don't know where to begin, awful in every respect, terrible adaptation, terrible acting, I do not normlly leave reviews but this film is so bad it deserves one, don't waste your time

Not sure how this film gets a overall 2.7 out of 5 - Not a lot to add to the above reviews only the fact that 1 * is too good for it

I didn't think a worse Robin Hood Movie than the one Russell Crowe did was possible, I was wrong, this is honestly one of the most awful movies I've ever seen.

This modernist, anti-capitalist, dumbed-down take on the medieval legend is abysmal. Fast-cut fights and anachronistic dialogue destroy all sense of realism. It’s all so politically correct it manages to be both ridiculous and boring at the same time. Taron Egerton is a blank-faced “Rob” (as his mates call him) who naturally has a Moorish friend in Jamie Foxx, because he’s not a racist, you see. Bono’s daughter Eve Hewson (wonder how she got the part?), although touted as a medieval feminist, is the most insipid Marian ever. Friar Tuck is a silly modern comic (and absolutely non-controversial). The list goes on. You’d hope at least for some action, but even that seems like forced play-acting.

It only makes sense if you watch the DVD extras and hear the misguided cast and crew wittering on about how the essence of the Robin Hood legend is “counter-culture” and “smashing the system”. Er, no it isn’t. Did no one at any point realise the whole concept was a turkey?

A truly awful movie. Nothing to commend it. All the modern jargon and attitudes are totally out of place.

Terrible movie.  Can’t believe this sort of crud is made.

Not as bad as you think - Robin Hood review by AB

Another Hollywood remake of a classic story that had its moments that lent an amusing slant - eg the scene in the Crusade battle where the unit is performing street fighting manoeuvres but instead of rifles they are doing "house to house" using bows and arrows. Not as bad as other critiques here but the CGI of Middle-Ages Nottingham - Just NO. On par with the Russell Crowe version as being 'different' without being ludicrous.

Possibly the worst movie I've seen in the last decade. And that includes the last 2 Terminator movies. The action is more video game than blockbuster movie & the acting is way over ripe. Nobody comes out of this smelling sweet.