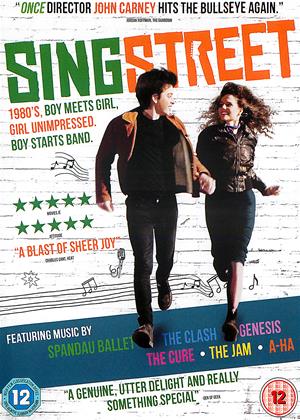 Here is a non-grumpy review. This is a gentle, feel-good film that packs no surprises. Music fitted the theme--nothing to take exception to. Just don't over-think this one, and you'll enjoy it.

Complete and utter ridiculous film fantasy... but who cares, that is what films are supposed to be like, we loved it!

This is one of those films that would never be made if it didn't get state funding (from Irish govt this time).

It's a deeply twee and sentimental romantic story - like one of those wish fulfilment photo stories from Jackie magazine in the 80s!

The plot (let's put a band together) is pure 'Commitments' - a sort of junior 1980s version. The minor characters derivative (the oddball musical guy with rabbits is a copy of the guy in the 1970s Liver Birds). Of course there is the token black too - but lovely to see him playing a Roland Juno 6 (like the one I bought in 1985 + sold 5 years ago for more than I bought it for as they're still a classic and popular).

Knowing 80s music SO well, I also found myself constantly annoyed by this movie. The Top of the Pops clips (eg Duran Duran) are 1980/3. At the time, they were a girls' band and no boys liked them, by the way (so why the elder brother music expert here does is a mystery).

Then the main character sings A-Ha's Take on Me (from 1985/6), and we have music from the late 70s too (M) and reference to Adam and the Ants (1981), plus Hall and Oates (1985). As a teenager at the time I notice these errors as I did in TV series Ashes to Ashes. Though I understand it - to limit oneself to 1983 and before means missing out A-Ha and others!

Which brings us to the music - as in, the original music the ever-changing fashion-influenced band of kids (which is way too good but I suppose has to be). It's so derivative and mediocre too - always an issue with films that feature pretend pop stars and pretend bands (the music is never good enough).

The Christian Brothers subplot is clumsy in this; the school bully one works much better. Various social issues plots are two-dimensional and simplistic JUST as they would be in one of those photo-stories from Jackie magazine which is what this really is (and the ending is absurd too).

This is pure romantic fantasy. Mills and Boon for teenage Irish girls, I suppose. Can't see many teen boys liking this soppy tale much.

So all in all, maybe one strictly for teen girls only? 2 stars. No more.

A reasonably promising start, but deteriorates as it progresses and is abysmal by the end. The supposedly 80s alternative inspired music sounds like it was written by a boy band's songwriter (mid 80s Dublin and no character mentions U2 - really?) Not recommended if you're a grumpy middle-aged person (like me)