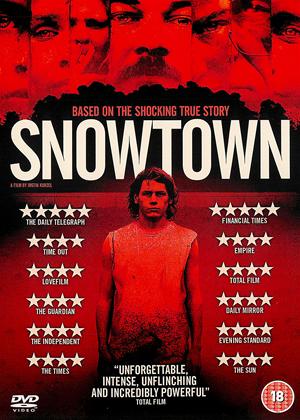 This is a seriously disturbing study of John Bunting, an Australian serial killer who murdered a dozen people in South Australia in the 1990s. It's a hard film to watch and I wouldn't call it entertainment.

It isn't a 'story' - this is real life, and the film is shot in a semi-documentary 'fly on the wall' style. Because of this and unless you know the people and background to the events it is somewhat confusing - if you do decide to view it I suggest you look up 'Snowtown murders' on Wikipedia to get a feel of who the characters are.

This isn't a horror film, it's more a film about how a charismatic psychopath invades the life of a needy, deprived family and seduces young James Vlassakis into a series of horrendous acts.

This is a tough watch and can't say that I 'enjoyed' this film, but it really is a tour de force of cinema. 4/5 stars - highly recommended, but approach with caution.

Absorbing but disturbing study of murderers - Snowtown review by OtakuFeebs

I'm going to be frank, I didn't enjoy this film. In fact I felt sick for most of it, probably because I am fully aware of the "Bodies in the Barrels" murders.

However the film deserves four stars because of its bleak uncompromising portrayal of this series of terrible crimes whilst never once being sensationalist. The lead actors are convincing and terrifying. Amazing work from Lucas Pittaway (who seems to have been plucked from the streets judging from the casting extras) and Daniel Henshall.

For the most part not much of the actual murders are shown, but the sense of dread and despair the film managed to capture really set me on edge. I had to pause the film a couple of times, not sure if I could keep watching. I ended up only listening to one scene and having to distract myself for the final quarter so that I didn't lose myself in the abyss of human depravity. With that said it really is a masterful piece of cinema, but I think it's fair to inform you of what you are letting yourself in for if you choose to watch it.

A young boy who lives on a housing estate with his mother and younger brothers feels trapped in his local barren and violent landscape. Yet when a man enters his mother’s life he may have found salvation in the strong and ever smiling father figure of John Bunting (Daniel Henshall).

Based on books written after a series of murder trials held in Adelaide, Australia, Snowtown is about the events that lead to the harrowing discovery of a series of human body parts that had been abandoned barrels in a rented former bank building. Eventually four people were convicted of the murders of twelve people after the remains of eight victims were discovered.

This strange and disturbing tale is told by a largely unknown cast, the star of which is by far and away Lucas Pittaway who plays Jamie, the fourteen year old boy who finds himself suddenly wrapped up in the whole grizzly debacle. His portrayal of the weak and impressionable young boy is outstandingly emotional; he displays a wealth of deep and mature emotions in the movies two hour run time.

The cast are probably the best thing about this film; unfortunately this narrative has not been crafted with a strong enough spine to carry through with enough clarity to truly let the performances shine. You can not help but find yourself somehow at sea; left to understand and decipher the mundane building blocks of the narrative – like how Bunting really came into the lives of this penniless family, he seems somehow to simply appear – as the movie is concentrating too much upon the turmoil and emotion of the events themselves.

Despite this I would highly recommend Snowtown if only to satisfy you’re most morbid sense of curiosity.