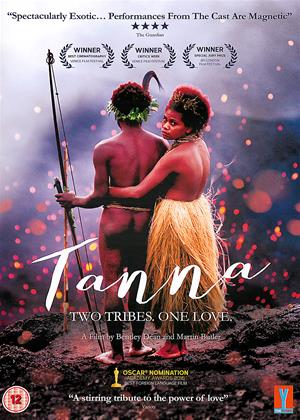 All the parts in this film are played by the tribes people of an island of Vanuatu, who had never seen a film. The story is based on an incident in the tribe's recent history that resulted in a change in their marriage customs and way they resolve conflict with neighbouring tribes. The film tells the story simply and movingly, without patronising or sentimentality, and allows the viewer an intimate look at the lives of the people on this island. The performances of the characters are completely natural and compelling.

There’s a brilliance to Tanna feeling as though its a cultural revision of Romeo and Juliet yet being based on a true story of a village bound by tradition. For a film so entrenched in the specifics and politics of an indigineous tribe, it’s a story that is almost universal in recognizing the yearnings of breaking culture and family for love. Directors Martin Butler and Bentley Dean have done an astounding job bringing this romantic drama to the screen.

Taking place in the late 1980s on the island of Tanna, the Kastom continue on with their long-standing tradition of arranged marriages to keep their lineage a constant. The tribe is under infrequent attacks for the neighboring Imedin tribe. Within the Kastom is Dain and Wawa, a couple that have kept their romance a deep secret from the rest of their people. Given that the tribes are exceptionally violent and peace between them is so very fragile, Wawa becomes a bargaining chip as she arranged to be wed to a member of the Imedin.

This complicates the romance of Dain and Wawa and becomes all the more troublesome for their lives when they’re discovered by the elders. So much pressure is placed upon Wawa to shirk her true love and adhere to the arranged marriage that she is approached in numerous ways. The elders stress everything from thinking of the future of their people to begging Wawa to reconsider. Soon, it is revealed just how flimsy these traditions are when Wawa reveals she has had sex with Dain which forces her to be exiled. But this move only forces the tribes to reconsider further, to the point where it may too late.

Butler and Dean have a true eye for detail with this kinda story. They take care to make the warring tribes feel as real as they can possibly be for being filmed in the Yakel village on Tanna Island. There’s astounding beauty to such a location with its lush forests and intimidating volcanoes, rivaling that of the greatest nature documentaries. The life of the tribes feels genuine considering the casting was mostly from locals of the region who could deliver an authentic and knowing performance. Many simply seemed to be going through the motions of everyday life within their village which brings a brilliant lived-in atmosphere to it all.

Ultimately, however, Tanna is most compelling for focusing on tradition versus freedom, questioning just how a tribe can progress either by defiance or learning lessons the hard way. There’s great passion and violence that comes off the screen as powerful as the imagery, making its familiar story with a predictable outcome far more compelling. It’s immaculate look at an earthy region where people still face the same troubles of trying battle between their personal love and the love of their people, conflicted about how much faith one can put in their heart.