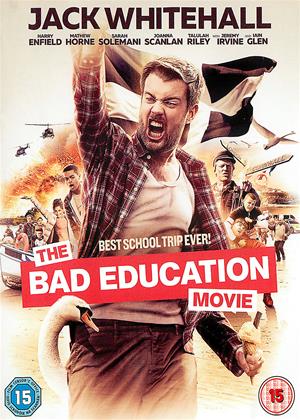 Reviews (1) of The Bad Education Movie

I am not sure what to make of this British film about a school trip. It's like a big cartoon strip, very lewd and crude in places, aimed squarely at a teen audience who giggle at such things - and would play perfectly in a packed noisy cinema on a Friday evening.

For me at home, it was thankfully short (though sometimes felt longer...) and the absurdity and lewdness of it all was redeemed by some funny lines and scenes, esp visual gags, which almost date from the silent movies! I loved the German party of kid gag, and some scenes in the pub.

The Cornish nationalist stuff was funny and could apply equally to Welsh nationalists - and the castle featured is in Wales not Cornwall - Pembroke castle.

A bit like The Inbetweeners but less sophisticated. Silly that the teacher is called Alfie as no-one that age has that name - teens, yes. I did not like the usual 'fat kid eats pies all the time' gags - not wanting to be pc but it seems being offensive and insulting like that is OK, though inaccurate: fat kids do not eat more than anyone else. Not once fat!

Anyway, all a bit silly but if you're in the mood, it is watchable - just pretend it's a cartoon. I have not watched the Tv series which spawned it so had not idea what to expect. I did laugh at some gags - visual ones especially, and the non-pc ones - they were refreshing! The Amsterdam flashback scenes...

Of course, needless to say, any teacher doing a fraction of the stuff Aflie does would not only be suspended and banned from teaching for life but would probably be in prison.