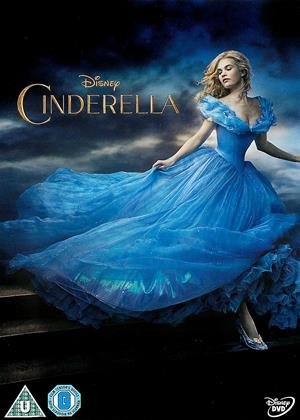 I'm generally not a fan of Disney films and their frequent Americanisation of European fairy tales. But my opinion comes way behind that of the intended audience - children. And here, the children (in my case, grand-children) have given their verdict: they loved it. I watched it with three girls aged between 3 and 17 and they all really enjoyed it.

I quite liked it too - it wasn't the over-the-top, too-Hollywood film I was expecting, but played straight for a change and with the always competent direction of Kenneth Branagh. The only comment I would make is that the 'ugly sisters' weren't at all ugly (except inside!) - but perhaps I've seen too much panto :)

This film was superb it was well acted by the main characters in particular Lily James she played a brilliant Cinderella. I have watched this twice.

Loads of fun had by all. Mirror Mirror a bit better to be fair, but is nicely done and intelligently executed.

The latest rendition of Cinderella by Disney is a refreshing change of pace from the modern reworkings of fairytales. It doesn’t try to amp up the danger by injecting higher levels of doom or grittier moments of action. No alternative perspective is taken where we see Cinderella from the prince’s perspective or focus on the origins of the fairy godmother. And, unlike Disney’s previous fairytale effort with Maleficent, there is no beat-over-the-head message or allegory that obliterates any hope of character development or arcs. It’s just an old-fashioned tale of Cinderella with its own brand of wit to distance itself just enough from its iconic animated counterpart.

There’s no major twist to speak of with this script. Our titular plucky protagonist, played wonderfully by Lily James, is enslaved by her evil step-mother and step-sisters as a housemaid. Her only friends are the responsive mice that warm her heart when secluded to the attic. The local prince is looking for a princess and Cinderella dreams of nothing but dancing at his ball. Her dreams dashed by her terribly greedy and jealous family, a fairy godmother pops up to give her the magical makeover and yadda yadda yadda. A romance is formed, a glass slipper is lost, a princess is sought and you know the rest.

So with no surprising elements to the classic story, what’s new that it has to offer? Aside from Kenneth Branagh’s witty direction of likable characters, there’s a charm to its simple warmth of whimsy. Classic scenes are improved upon without downplaying or overplaying the magic of it all. Take the memorable moment when the fairy godmother (Helena Bonham Carter) transforms a pumpkin into a lavish stagecoach. Rather than just being a simple effect of a vegetable expanding into luxury, the godmother amateurishly casts her spell inside a garden gazebo forcing the structure to burst in a glorious blaze of pixie dust. When she transforms the nearby creatures into horses and carriage men, they do not adapt on the spot. The lizards as coachmen still eat flies with their tongues and the first words out of the goose turned driver is “I can’t drive, I’m a goose.”

The characters are expanded just enough to keep the story more engaging, but not derail from the focus. The evil step-mother and step-sisters are kept simple as greedy women who step all over her sister. There’s no added dimension to their fearful motivation of poverty or extra degree of cruelty they show for poor Cinderella. They don’t spit on her, smack her across the face or display any further amount of torture that goes to heavier extremes. These are not exactly deep characters to begin with, but they play the roles comically enough with their devilish ways of displaying jealousy.

Characters who felt much more flat in the original Disney classic are given a tad more development. The biggest culprit is the charming prince (Richard Madden) who existed more as eye-candy than a key player. I was hoping that maybe he would be the one who searches the town for his mysterious princess, but that may have been much too divergent. He’s thankfully given just enough time to breathe as a character as when he gets a chance to really talk with Cinderella behind closed doors at the ball.

It feels strange to appreciate a film such as this that is more old fashioned than modernly retooled. Every fairytale these days seem to want to either have something important to say about society or turn the narrative on its head with a rebellious cry. But that’s what makes Branagh’s visions of the old texts so pleasant and unique. He can see what made the stories so interesting in the first place and capitalizes on it perfectly. When he directed his version of Hamlet, he had an ear for the dialogue and an eye for the stage. He can take a story and make it work without the need for completely conforming it to the shifting landscape of society and culture. In some sense, he’s a preservationist for older works, making them stand well enough on their own without added baggage.

During the scene where the pumpkin carriage begins to contract back into a vegetable, it swerves around a cliff narrowly avoiding a tumble before it skids to the forest floor - smashing into pieces with Cinderella bursting forth. I can’t help but think that another director would have felt the need to make the cliff scene longer with Cinderella dangling over the edge and the animal-reverting men struggling to pull her up. Branagh maintains focus squarely on the fantasy and never gets caught up in blending genres.

The new Cinderella doesn’t overhaul the classic narrative, but gives it a fresh coat of paint and a spiffy polish. It may be a vanilla offering of the Disney princess, but sometimes all the cooky and crazy flavors of the rainbow can’t beat a golden oldie. Screenwriters Chris Weitz and Aline Brosh McKenna prove you can still find some entertainment out of a fairy tale that doesn’t have to beef itself up with an edgier angle. Unlike Disney’s previous live-action fairy tale Maleficent, adults can rest easy to enjoy this picture as there’s not a single rape allegory.