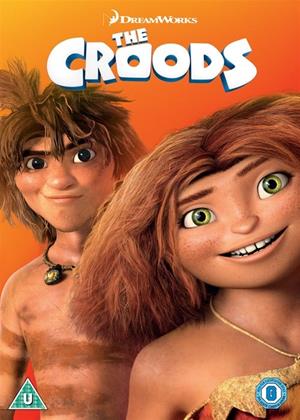 Reviews of The Croods

The Croods is an unusual animated movie unlike most of its Dreamworks counterparts as it doesn't really feel like an original thought despite the fact the film is filled with many reasons to enjoy it.

The film feels like a cross between The Flintstones and The Incredibles and it feels recycled for that reason. However what differentiates it from those examples is its sense of humour and its visuals as the film proves to be filled with hilarious characters of weird and wonderful cavemen who are forced to leave the safety of their cave as they are told the end of the world is coming. The film is clever in its treatment of these primitive characters as they learn things about this world director Chris Sanders has designed.

The visuals on display are awe inspiring, especially when the film reaches its thrilling climax. The voice cast is a very unusual selection of actors but the film thrives through the father daughter dynamic of Grug (Nicholas Cage) and Eep (Emma Stone). The film ultimately is about family and does a good job of presenting an unusual but moving family unit that children and parents can enjoy. The film does take some getting started and doesn't really grab you at the beginning, in fact it only really gets its running legs when Guy (Ryan Reynolds), a much more advanced human enters the picture.

That being said, its final act does an excellent job of making up for it with a visually spectacular finale filled with comedy. It's not as good as the director's previous effort, the heart-warming How to Train your Dragon but The Croods is an admirable next effort that shows off in its visuals and will make the whole family laugh.