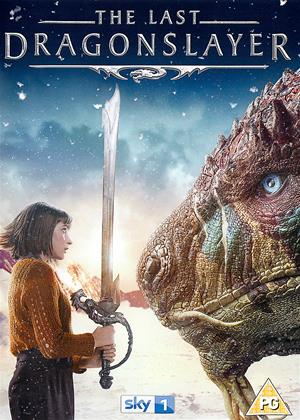 Reviews (1) of The Last Dragonslayer

A confusing film - it doesn't know whether to be a comedy, romantic, role-player, fantasy, teen-based, adult-based or what - and thereby fails in all fronts.

Simple storyline about a girl with magical abilities (or does she? or is she taught?) trying to find her mentor (who has disappeared - or has he?) in a strange world where cars exist (but they are also pulled by horses so confusing here as well), where television exists (but people live like serfs), where tank-like weapons exist but swords are the main magical weapon, in a kingdom ruled by some sort of half-wit.

Two stars in my review is probably pushing it a bit

The Last Dragonslayer looks, sounds, and reminds of a family film, and that’s exactly what this offering is all about. In it, there isn’t any fancy CGI, expensive sets (although the sets are decent), triple A movie stars, or anything of the sorts; in all truth, The Last Dragonslayer is a very “quiet” movie experience insofar fantasy goes. However, the film nails the one thing that matters: character development and character traits. To this extent, Jamie Magnus Stone’s piece fires on all cylinders to deliver a cinematic tale of love, wonder, amazement, friendship, and learning to work alongside others in order to bring balance to the world.

The film revolves around the magical stones which protect the land of Dragonlands. However, dragons are slowly dying out and the magic that was once wielded freely by the citizens of this world has been now slowly dissipating into forgetfulness. And so, the audience meets The Great Zambini (Andrew Buchan) who adopts an orphan called Jennifer Strange (Ellise Chappell). This Great Zambini runs a magical agency (you read that right) named ‘Kazam’ that employs two full-time wizards. However, due to the fact that the magic ways have been slowly abandoned by the citizens of this world, wizards are now doing mundane tasks like fixing the piping or improving households in one way or the other. But, as all fairy-tales go, one day The Great Zambini flat-out disappears and it’s up to Jennifer to slay a dragon shown by visions by, I guess no one in particular (consider this a third-person singular equivalent of a movie). And not only that, but ‘silly-name’ Brian Spalding suddenly shows up, gives Jennifer a magical sword which features every dragonslayer’s name up to, well, her, and then Brian dematerializes into dust. Oh, and now, Jennifer is… The Last Dragonslayer (cue in dramatic music).

Then, Jennifer is taken before the great, almighty King Snodd (played by Matt Berry) and is forced to adopt Sir Grifflon as her squire. Then, after numerous vicissitudes, Jennifer finally meets the one and only dragon, but she outright refuses to take its life and as a result is shunned by the public. Plus, the slaying of the dragon is in actuality a project that’s being sponsored by the Costco equivalent of this world called Stuffco, which is kind of a neat touch. What happens next will blow your mind (I’m just kidding, it’s your typical fantasy story only married with a contemporary world).

The Last Dragonslayer is not bad, not a masterpiece, but something in-between that’s suitable for the whole family to enjoy. Take it as such, and you’ll probably have tons of fun with this one.