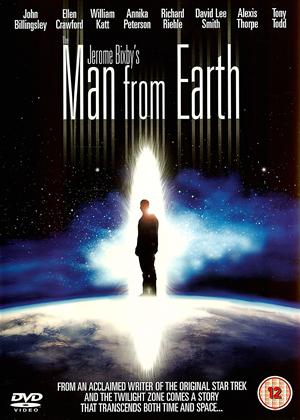 Reviews (2) of The Man from Earth

A cheaply filmed sci-fi tale in which a college professor who is leaving town confides in a group of close friends that he actually 14,000 years old. Due a quirk of nature the cells in his body have the ability to constantly repair and regenerate themselves meaning he never ages. If this wasn't unbelievable enough, throughout his long history he's been a cave man, close friends with the artist Van-Gogh, sailed with Christopher Columbus, was a close disciple Buddha and best of all was actually Jesus, and managed to survive crucifixion by 'blocking the pain', a technique he learnt while in India. The core of the story is about is he making this up or is he telling the truth? Overall, this is very similar to a feature length episode of The Twilight Zone or the Outer Limits, and a pretty mediocre episode at that. The book on which it was based was probably a good read, but as a film it is so far fetched by 30 minutes in you don't really care whether he's telling the truth or not.

Pseudo-intellectual - The Man from Earth review by JH

An academic named John 'Oldman' (clever stuff) about to leave town, gather his closest 'friends' to his cabin and tells them he's a 14,000 year old Cro-magnon man.

Nothing in the way of a cinematic experience here, it's staged more like a play around (mostly) one single location, it's focus is on a script aiming roughly in the direction of philosophy -- covering a bit of religion, human impact on environments and the 'goodness inside' -- and the 7 characters that debate their way around their friends' rather ludicrous spur-of-the-moment announcement.

While it's understandable each character takes such a different stance on John's story, it's also here that the story becomes so unstuck for me: even if you can ignore the occasionally ropey acting, the reactions to the various things John states during the evening are so unbelievable and extreme it's farcical.

And they play to stereotypes, Ellen Crawford's 'Edith', a character so spectacularly annoying even in the presence of the ever-delightful John Billingsley, is a devout Christian and is so easily upset she has to announce she can't listen anymore at several points.

It's a pity as there are some few tidbits of interesting points covered here, but not enough to even cover it's slim 87min running time and the way it's acted out is so distractingly irritating it's a wonder I finished it.