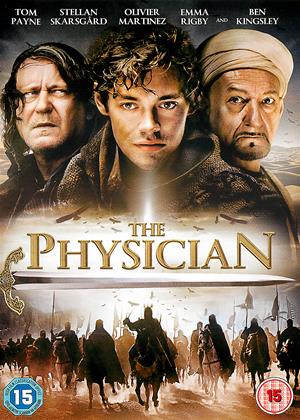 Reviews (3) of The Physician

Long and slow - The Physician review by Alphaville

This 4-hour German TV production was cut down to 2.5 hours for cinematic release but is still achingly long. It plays like basic early Saturday evening TV fare, with stultifying direction and an irritatingly overbearing score. Stolidly paced and with little narrative thrust, it has taken over 20 years to come to the screen and was probably better left in book form. Lovers of the Isle of Skye will at least be amused to find our 11th century hero travelling around the Trotternish peninsula and coming across Dover!

I was not able to watch this film due to (a) the quality of both picture (- lacking in clarity/definition) and sound (- muffled); and (b) the fact that there were no subtitles, at least none that I could find. Most disappointed.

Epic, stolid over-long German-produced movie re 11th century world - overlong + crams too much in. - The Physician review by PV

This comes from a novel and it shows - it tries to cram in way too much: an unbelievable spiritual 'seer' plot; 11th century England; 11th century Iran; Muslim history; Jewish history, Christian history; the expected romantic subplot...

BUT good in parts though historically inaccurate - there WERE hospitals and doctors in 11th century England and well before that too. Even Stonehenge is now recognised as a healing place. The Dark Ages are misnamed and only named so in later centuries when historians and philosophers wanted to show how advanced they were compared to their forebears.

Of course, the medicine of the Islamic world drew completely on work done in Ancient Greece then Rome - and the part re radical Islamists wanting to destroy everything is true: by 1100 Islam ossified and that is still having effects today, as Islam has had no reformation. At this time the Muslim hordes burnt down the great library at Alexandria which contained many Aristotle texts - HOWEVER now wonderful technology is allowing researchers to read scrolls that are nothing more than carbon.

The idea 11th century 'doctors' knew nothing of body parts or medicine is simply untrue - people in the British Isles were using medicines from nature for centuries, including willow as aspirin to treat headaches and pain; and copper oxide to treat wounds; and gold and silver too. Plus plants - some of which worked!

Apparently this was originally a German TV movie in several parts and probably worked much better that way.

I hated the cod-spiritual seer/healer/premonition sub-plot and the romantic element was predictably boring. I preferred the medical and religious parts THOUGH one does have to bear in mind that all Jews were expelled from England under Edward I (I think) but then readmitted by Oliver Cromwell in the 17th century.

NO subtitles at all though is a great weakness especially as some of the cod-Persian 11th century accents are barely understandable!