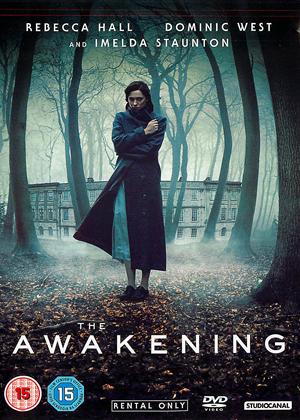 Reviews of The Awakening

1921 Great Britain. It is post-World War I, the Spanish flu epidemic has claimed more lives, and its population is on the mend. Their spirituality has heightened and especially in their belief that they can see dead people. A woman named Florence Cathcart (Rebecca Hall) doesn’t believe in ghosts and she has made it her job to debunk these ghost hoaxes. Stern with her belief and calculating with her methods, Florence keeps a tool kit that is reminiscent of Sherlock Holmes, Sleepy Hollow’s Icabod Crane, and even steampunk ‘Ghostbusters’, what with her reactive chemical powders, trip wires and electromagnetics in tow. Florence is no ordinary lady; she’s The X-Files’ Scully in period garb. Florence Cathcart is the heroine of the ghost story ‘The Awakening’ directed by Nick Murphy.

‘The Awakening’ is a tight ship of a ghost film in the vein of ‘The Orphanage’. This time, the setting of the haunting is in preparatory school for boys, headed by a former war veteran (Dominic West). He seeks Florence’s (Hall) expertise upon the recommendation of her number one fan, the old schoolmarm (Imelda Staunton), whose fidgety response to the spectre-in-question is swelling. Florence comes into the fold a skeptic but this is a movie after all, there would be conflict. During Florence’s investigation of the school, she indeed sees a ghost. What of her scientific approach then? Is there really life after death?

Rebecca Hall holds her own as a scientist now questioning everything that she has ever known. Though strong and formidable, she plays her ghost detective Florence with fragility as well. Gone are the days when ghost stories were well-made movies such as ‘The Sixth Sense’ with its less-is-more effects. Scary has become gore, blood, and guts. ‘The Awakening’, however, believes in the slow burn. Just when you think you have figured it out, the rug will be pulled under you and you’re left with an expression that says, ‘What just happened?!’

Finely acted and beautifully photographed, ‘The Awakening’ is an unhurried but confident showcase on how to induce screams, scares and nightmares with just a really good story.