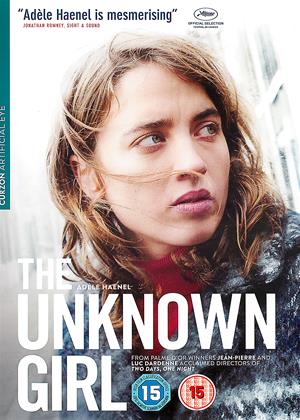 Reviews (8) of The Unknown Girl

The Dardennes brothers (who directed) are a bit like a French (or Belgian) Mike Leigh with a touch of the unexpected. Films that observe their characters and let us feel with them in the situation shown. The Unknown Girl is a fine example as the doctor mixes her feelings about leaving her socially responsible post as doctor in a poor area for a flash new clinic with her feelings about an unknown girl who gets murdered more or less on her surgery doorstep. Guilt drives her to investigate and we are taken along for the ride.

Finely acted, especially by Adèle Haenel as the young doctor and Louka Minnella as the boy Bryan who may or may not have something to tell.

It was good enough that we felt the need to watch it twice to pick up on some of the nuances.

I was transfixed by this film. - The Unknown Girl review by DW

Faultless acting, inspired direction. I've just watched a "This is how it's done" Masterclass.

A simple story line gave a range of actors a chance to show us the true realism of a slice of modern life: they didn't pass up the opportunity to raise the bar. British film makers, by comparison, are light years away from getting close to entertainment of this quality.

(How I wish UK doctors were as committed to patient well being as was depicted here).

The Doctor's Dilemma. - The Unknown Girl review by NC

The only other Brothers Dardenne film I'd seen prior to this was 'Two Days, One Night'. In it a company gives its workers a stark choice of a bonus, or one less colleague. Marion Cotillard finds herself wandering around town, knocking on doors, asking people to think of her in the upcoming vote.

'The Unknown Girl' is another film to prick the social conscience, and it also presents a young woman on a quest. Young Dr. Jenny Davin needs to atone for a random, momentary act of negligence, setting the tone for a downbeat but valid take on how we treat one another. She is cool and efficient at work, and conducts her search for the identity of a girl who has been found dead, in the same emotionally detached manner.

The disclosure is all a bit pat, and stretches credulity. Patience is stretched too, as there are numerous pregnant pauses, presumably intended as dramatic realism, but playing a part only in twitching a finger on the fast-forward button.

As the overworked, conscientious Dr. Davin, unable to forgive herself for one slip, Adele Haenel is exceptional. Utterly convincing scenes in the surgery and on her rounds give a compelling documentary view of a life asked to do too much. She simply hasn't any time for happiness.

In a world where money is all that matters, where looking after number one comes first and last, and consideration of another individual counts for nothing, the Brothers Dardenne are clearly on the side of the Angels. Their films are unlikely to change the catastrophic course humanity has taken, nevertheless all power to their elbows.

Not what's on the tin - The Unknown Girl review by BE

Bit of a long drawn out storyline with little consequence. A lot of the film follows a young female doctor around tending people with health issue, whilst investigating another issue. Very nicely acted by Adele Haenel but little in the way of excitement.

A wonderful film, while it has an overarching plot of the mystery of a murdered girl it is very much a character study on guilt and what we would do to help absolve it . The dialogue is spot on, abrupt and to the point while still filled with emotion , the lead actress Adele Haenel was terrific and the supporting performances were spot on too. Perfectly paced , would highly recommend it.

I will definitely be searching out more of these directors films.

Absolutely dire, slow, dull , lame plot do not waste any of your life watching this appalling shite ....wooden acting, awful direction, with actors who really phoned it in, .... I really cannot damn this film enough. Looks like it was made by some 12 year old students who won a competition and the prize was a hand-held camera. If you want to see what the day to day workings of a provincial GP's practice in Belgium look like, then this is the film for you. The characters are empty and unappetising and one has no investment or interest in them. The actors look like they are getting a prompt off camera for every line, there are such gaps between each speaker. No wonder the Belgian film industry is so highly acclaimed ( not...)

Lacking in Care - The Unknown Girl review by RP

The Trailer for the film has a nice little musical soundtrack running through it. The Film has no musical soundtrack at all. No doubt this adds to the realism and the heavy guilt we all supposed to feel. One casual act can lead to consequences we have no control over. The film is well acted and at times awkward to watch. Like walking into a room where people continue with what they are saying and just ignore your presence. But the lack of dramatic impact is partly down to the lack of music. It is fine making things look real. But when everything feels so downbeat and raw we tend as a viewer to have time to question motives. Would the Doctor really care so much even when she feels threatened? If guilt is so overpowering then wait until you do something that is really bad. Life is real enough for me. My realism in films need to have a musical accompaniment.

Worth Watching - The Unknown Girl review by CSF

lt could have been better if the characters were talking or expressing themselves a bit more. The film is good but demanding; you have to guess all the time what the characters are thinking. I know it is an intellectual exercise but not if you are tired or looking for sheer entertainment. It is a 'Dardenne'.