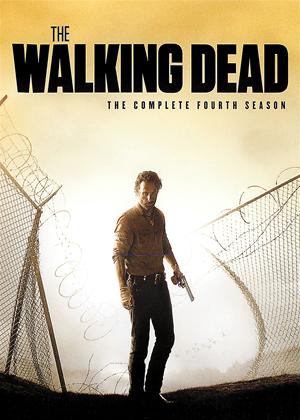 Reviews (4) of The Walking Dead: Series 4

I really enjoy this series and for me it just keeps getting better and better. Very good fight scenes and still got the graphic fighting aswell. Things are not as secure ond cosey in the prison anymore. Can't wait for series 5.

Must See TV - The Walking Dead: Series 4 review by DG

To be honest I never really liked Zombie movies, I think it was after watching The Day of The Dead when I was younger that Zombie movies would give me nightmares. Needless to say I have avoided a lot of Zombie movies since.

The only reason I started watching The Walking Dead was due to the involvement of Frank Darabont who has made one of the greatest movies ever (Shawshank). Lets just say that from the first 5 minutes of Season 1 episode 1 I have been totally hooked. The performances are excellent and the fear of dread never leaves regardless of what is going on on screen. Season four is no exception as it subjects our crew of survivors to more gut wrenching survival. The Walking Dead is up there with Hannibal and Breaking Bad as TV of the highest order.

After everything that has happened with the governor things calm down at the prison. All is not well though with someone feeding rats to the zombies and other things afoot all is not well. This is an excellent continuation of the series - we get more back story and clever flash backs and interesting turns. In some respects as in previous episodes its more about the characters than the zombies. Survival is the number one thing though as everything is turned upside down and by the end of the series we're left on another cliff hanger. There are plenty along the way with some truly heart felt episodes. Definitely worth watching.

By the fourth season of The Walking Dead, the threat of zombies doesn’t seem as tough now that all the survivors have grown comfortable with zombie killings and the down atmosphere. At the end of the third season, Rick finally snapped back to reality with reassembling a community within a prison. The evil Governor has been driven out of his ravaged community and the inhabitants have taken refuge in Rick’s peaceful paradise of open gardens and organized supply runs. It’s about as stable as life can get for living within a prison and protected from zombies. So, of course, it’s all got to come tumbling down beautifully.

The fourth season wastes no time in this department as a zombie flu starts infecting the community. With an epidemic on their hands, it’s up to Rick and his band of travelling survivors to track down medical supplies. Some stay behind to tend to the weak and contain the outbreak while others venture out into the dangerous unknown. But, like I said, zombies are slowly becoming the least of their problems as trust between them and outsiders dwindles. Characters who once seemed timid soon find themselves venturing down darker paths. Those who were once meek now find themselves taking on braver responsibilities. And the elusive Governor finds himself at a crossroads of how he wants to proceed with a fresh start.

For the first half of the fourth season, this is Walking Dead at its finest. The tension of the increasing outbreak is punctuated by brutal character development in/outside the prison walls. There are a handful of plenty unique revelations with no guarantees about who will live or die. Not even the children are safe as quite a few bite the dust when you least expect it. Though the zombies mostly seemed to be a contained disturbance, they still have plenty of gory moments of violence in hordes. The opening episode features a raid on a grocery store where the zombies have piled up so heavily on the roof that they bring the house down in an impressive display of carnage. A buried zombie rises from the sand to assault an unsuspecting human. But the best part of the entire season is the grand showdown between Rick and the Governor that many felt they were cheated out of in Season 3. Without giving too much away, let’s just say it involves tanks and swords.

The second half of the season, however, is a mixed bag. Our protagonists splinter off into groups so the remainder of the episodes will only focus on a handful of characters each. We have an episode entirely devoted to Carl defending his tired dad from invading zombies. We have an episode where Beth and Daryl form a quiet mentor bond of hunting and booze. Tyrese and Carol come to grips with their fears and demons as they look after the children. While forming new alliances with strangers, they’re all constantly fearing that they’ll never be reunited. And just when it seems that the gang is all back together when they reach the latest sanctuary dubbed Terminus, the season ends at the juiciest of cliffhangers after half a season of mild drama.

Even if it becomes too preoccupied with building up character in its second act, the fourth season of The Walking Dead still has a lot going for it. The cast remains stellar, the horror remains thrilling and comic creator Robert Kirkman returns to direct a handful of exceptional episodes for this season. It’s amazing that the series has remained relatively solid thus far which is commended by being one of AMC’s highest rated and most celebrated programs. Even when the series seems like it’s beginning to wane with trying to juggle a plethora of characters to follow, the show rarely feels like it’s trying to slow down or cheapen its effects. The rot hasn’t quite set in yet for this zombie survival series that serves up blood, guts and tears like none other.