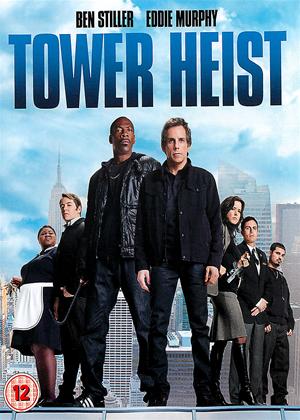 It's about a heist. In a tower. There's a baddie, and some goodies. The baddie gets his comeuppance, the goodies get their reward at the end. That's about all the depth you're going to get in this film - but if you like Ben Stiller then you might like it. If you like good films on the other hand, then you might not.

It's mildly entertaining, but essentially it's drivel. Then again, Michael Mcintyre has made an entire career out of that.

For the X-Men fans who hated X-Men: the Last Stand (2006) or Jackie Chan fans who loved Rush Hour (1998) comes Tower Heist, a high concept action movie about a group of employees who realize they have been stiffed by their boss and want revenge.

Ben Stiller plays Josh Kovacs a building manager for an elite business apartment building called “The Tower” (the Trump Tower of the Hollywood-pretend-world) who has been loyal and dedicated service provider for years, making sacrifices of his own for the sake of his building; particularly a financial expert and billionaire Arthur Shaw (Alan Alda). Things begin to unravel for Kovacs however when, shortly after enlisting Shaw to invest the entire company’s pension, Shaw is busted by the FBI for investment fraud.

Things get even worse for Kovacs as the FBI inform him that it is unlikely that his pension money will ever be recovered. Heartbroken and furious Kovacs and his fellow Tower employee’s decide to raid Shaw’s apartment and steal the millions of dollars he has hidden in there as compensation for the loss of their pensions. To do this they enlist the help of an ex-con, played by Eddie Murphy.

Although it takes a surprisingly long time before Murphy is properly introduced to the plot the film concentrates largely on him and his patented brand of humor. Unfortunately this doesn’t really offer anything new; even those who normally find the same old recycled jokes hilarious will find Tower Heist a fairly run-of-the-mill comedy, which does not deviate from your expectations for a single second.