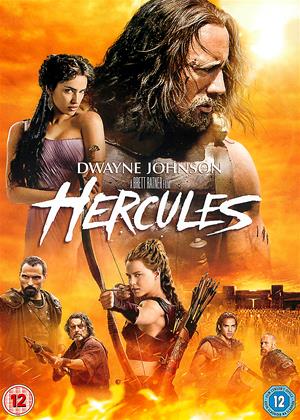 Lots of battle scenes, moody lighting sets the scene, but it just did not click for me. Just another historical film with nothing really to recommend it.

I enjoyed this Hercules film and it is probably the best I have seen , Dwayne Johnson did a good job , the best part I have seen him do. I gave it a e because there was just something that didn't keep me glued to the film.

I've seen both the Hercules films and this one is miles better. Firstly, this film is based on a graphic novel, which it stays relatively true to, NOT the Greek fable that we are all familiar with, so bare that in mind. As many have already said, Dwayne Johnson does very well in the role, I think he was born to play it. While it is an action film at heart, there is a mystery side-plot. Johnson's Hercules is haunted by the loss of his family, which he believes he is responsible for, but as the story progresses you learn not everything is as it seems. The supporting cast is solid, Ian McShane's seer -who is convinced his number is up- is fun to watch. The son of Zeus angle isn't overplayed here like it is in some versions, Johnson's Hercules is more noble mercenary with a side of confidence trickery, which makes a refreshing change from Legend of Hercules which forced his parentage down our throats. Overall, a good film which my family and I enjoyed so much we went out and bought it.

Dwayne ‘The Rock’ Johnson has gone from career to career, with his fan-base continuing to grow. He has been a college football player, professional WWE wrestler, and now he is a Greek demigod. This film is the second about Hercules to hit cinemas this year - with Kellan Lutz starring in the title role of The Legend of Hercules. Johnson’s film definitely has its ‘cheesy’ moments (“I am Hercules!”), but excels as pure entertainment.

Hercules begins by showing us the conquering of the legendary twelve labours (the Lion, Hyrda, the Boar, etc.) to get us familiar with the title character. Hercules, son of Zeus, is a heroic warrior mercenary. He is beyond the strength of any mere human, but he is tortured by the loss of his family. With nothing and no one, he does what he does best, and his skills are soon requested by the King of Thrace (Lord Cotys) and his daughter. Threatened by the tyrannical warlord Rheseus, Hercules must transform Cotys’ men into an army that is capable of defeating Rheseus and keeping the innocent safe.

Over the years, there have been many films that focus on Hercules, so it is difficult to make one more influential or entertaining than another. This film simply succeeds in creating an enjoyable experience. The overall pace is good, without being too emotionally heavy or boring. In the first two minutes, we see Hercules in all his glory, completing the twelve labours. Johnson is in perfect physical form for the role, and you can almost believe he is strong enough for these amazing feats.

Despite the obvious lack of real threat - I don’t think anyone in the audience could relate to the majority of the on-screen jeopardy - we believe these characters. We feel for their loss and their worries, and that is something hard to do in a film so detached from reality. Veteran actors Hurt and Fiennes are brilliant as always, though the “gruelling” eight months of training for Johnson might be starting to become too much for him.

The use of CGI was good, and not over-the-top like other fantasy films tend to be. They were used a lot at the beginning of the film, allowing the rest of the film to be more character-driven, with the CGI mostly adding to the feel and setting. The lighting was quite dark, sometimes making it harder to see the effects, but this could also been more of a creative style by the director.

Hercules has received mixed reviews. It might not be the most important movie released this year, but it has been well-received and enjoyed by audiences.

I am not sure whether the release of two Hercules movies this year will affect the success of either. However, this film is a must-see if you are into the thrill of adventure and want to be transported to another world. It does not stick too closely to the mythology, but the essentials are the same.