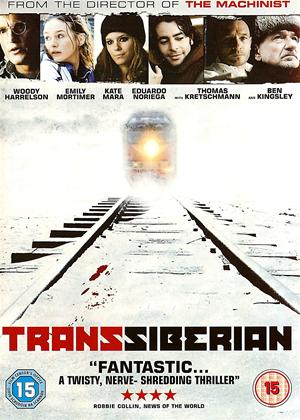 All the ingredients are here for a fantastic thriller yet Transsiberian fails to really gel, enduring a similar fate to that of The Machinist – Brad Anderson’s previous film. It is beautifully shot, with Woody Harrelson playing a convincing hardware manager who has strong religious beliefs. He and Emily decide to go by train to Moscow after completing church work in China, with Woody’s character being a complete train enthusiast. Whilst travelling on the cramp sleeper service they strike up a relationship with their roommates, Carlos and Abbey. Sir Ben Kinglsey, often variable in quality, is fantastic here as the local cop, menacing and brooding despite limited screen time. In comparison the two female leads are lightweight lacking clout and believability, often relegated to provincial roles when their stories should be the centrepiece. Going straight to DVD can be seen as a barometer of quality, but this is a solid adventure pitted against the stark Siberian environment. Well worth a rental and still confirms Anderson as a director worth watching.

Too long on a train - Transsiberian review by CP Customer

Well acted and thought provoking thriller but you wonder regarding the naiveity of the young couple. Justice is done but a bit harshly!

Chilling in every sense - Transsiberian review by JD

Beautifully atmospheric cinematography. The cold bleak endless snowy forests feel eerily ominous and threatening. The plot is pretty unguessable but utterly believable. The acting is generally fantastic notably Harrelson and Kingsley though Mortimer has a slightly pained expression which looks out of place most of the time. Mara and Noriega are great baddies, difficult not to genuinely distrust them.

I found Woody Harrelson's acting painful, dreadfully miscast...so over-acting the geek that I thought it deliberate and he'd turn out to be one of the baddies. A good preview for those about to embark on the trip!

THE SENSE OF A BEGINNING - Transsiberian review by CH

All too often writing about film is a matter of statistics (opening-weekend grosses, Asian sales). To compound that offence, it is none the less worth noting that Transsiberian (2008) - written and directed by Brad Anderson - had a brief cinema release at the time. Since then - as, one might say, a sleeper - it has accrued a wide audience on disc, although one can imagine that the scenes inside and without the eponymous railway carriages would look all the more remarkable on a large screen.

Not that this belongs to the picture-postcard school of film making, for it is driven by a strong sense of character from the opening scenes. Somewhere in Russia, at the water's edge, a dead body is found, the evidence of departure: a knife in the back of the head. What's more heart rending to those around is that a cupboard no longer contains what was evidently a great wad of money.

Ben Kingsley, in a grim turn as a police inspector, is set to take up that case. All of which one might soon forget as the scene cuts to the refulgent air of a happy-clappy religious school in Bejing where Woody Harrelson and Emily Mortimer have been volunteering as part of a worldwide journey.

Such is Harrelson's geekish penchant for railway engines that they are taking the train to Moscow as part of a return to suburban life in America (all of which contrasts with Emily Mortimer's highly-charged, freewheelin' past). Anybody familiar with British commuter lines can only marvel at the well-appointed and affordable dining cars to which passengers make their way along corridors which, naturally, will become perilous.

Here is homage to many a film set upon a railway, something which mixes mobility with the narrow locales in which, perforce, strangers meet and reveal more of themselves than they are aware. The heavy wood panelling brings to mind rash pub confidences as the couple talk with Kate Mara and the alluringly rough Eduardo Noriega (who prompts Emily Mortimer to recall earlier dalliances) .

Something is underfoot - one might say, underrail. This is no charabanc ride. Enigma multiplies. A week is a long time in crime. Just when you thought it safe to go back in the carriage, with a freight of a suitcase of those dolls whose heads come away to reveal another within.

Human heads are also likely to come adrift (this is not Rome Express and The Lady Vanishes), but it keeps above the cartoonish, a fit depiction of the Slavonic criminal world and the unexpected limits to which others can have recourse when stumbling into it).

Is one moved by it? Perhaps not, and yet it is something more than bland entertainment. Needless to say, here is another bravura performance by Ben Kingsley, but it is a film with many a twist to an actor's face: bespectacled, every mother's son, Woody Harrelson duly drops his guard (and spectacles) when needs must.

With an ever-moving camera (including the one used by Emily Mortimer), here is a film - continually switching points of view - which stays with you even longer with you than a points failure outside Etchingham Junction.