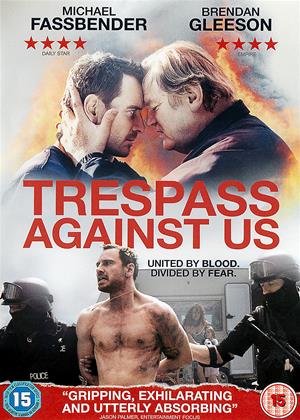 Reviews (2) of Trespass Against Us

This is a TYPICAL UK state-funded film (money from the taxpayer, the BFI, Film4, the lottery). It focuses on a supposed ethnic minority, the gypsies or travellers or Romany if you prefer (interesting to hear the dialect and even the Romany language sometimes in this film).

Now, it's all well-acted with a class cast, esp Rory Kinnear as a copper, and the story has pace (though the ending disappointing).

However, the behaviour of the 'travellers' made me hate them.

And I suppose that is the crux here: if you're a Gorgie (non-gypsy) then your feeling about this film will depend on your experience with these people in your life.

Now, as a kid there were gypsies around sometimes, ripping homeowners in the suburbs off by tarmacking their drives badly, stealing lead from roofs as scrap, and their gypsy kids would chase local boys and push them off their bikes - steal the bikes and resell em, keep em or sell em for scrap. I was chased once. I always avoided gypsy camps and their rough criminal kids.

Now, if your image of gypsies is that they're a quaint ethnic minority (as if) selling lucky heather, then fine. But watch this film to realise the days of painted caravans are long gone.

But be warned, dogs so get hurt in this film (not really - but in the story - and some may find that hard to watch).

Could not watch more than 15 minutes of this film. The characters never stopped using the f**k word and others. I am not a prude by any means but this was so tedious and mind numbing after 10 minutes I really had enough. Also as far as the subject matter was concerned there were no surprises for me. They were just all horrible people a bit like real life maybe that's why it did not appeal to me. The actors were wasted on this film

Trespass Against Us review by Adrijan Arsovski - Cinema Paradiso

Trespass Against Us is Adam Smith’s first feature film, and to this extent the film manages to deliver on several levels; namely, it immediately establishes the premise by mounting a camera on a crazed hare’s heels and following its doings through what seems like an expansive meadow – all while the rabbit is chased by something or someone. Turns out, chasing is the main predisposition of the Cutler family whose antics surmount to thieving, lying, and pretty much everything immoral one can think of. And Trespass Against Us manages to portray this clan as troublesome people whose moral compasses – given the circumstances – took a wrong turn.

The film then shows us Chad Cutler (played by go-to dramatic tour-de-force presence Michael Fassbender), who puts his loyalty under none other than his father Colby Cutler’s (Brendan Gleeson) domineering hand. And with Chad’s brother already in prison, he looks at his son and tries to find a way out of the Cutler family’s immoral claws and offer him a different future than the one experienced by himself, his brother, and his father all three alike.

However, in order to create a different future for his son, Chad must reassess his relationship with Colby and the character of Colby as such, where he must put his young family’s well-being above the clan’s (and Colby’s) wishes. A good place to start, as Chad realizes, is to offer his son something he was denied from Colby – a proper education. Otherwise, it seems like there is no other way out.

On the other side of the fence looms Colby – an uneducated patriarch whose limited ways can cause enormous havoc around those closest around him the most. His robbery methods now seem inefficient and outdated, but Colby does everything in his power to exert the remainder of his authority over Chad and take him down together with him. However, Colby still does what he knows best, tying the whole clan together with an invisible thread that is to break at any point in time. The Cutler’s time is nearing to its sunset, while Colby knows this and just can’t let go of his old ways in order to embrace the new; it’s just not in his character to accept that he is the ultimate anti-role model which shouldn’t come near to Chad’s son – let alone educate him in his ways.

Chad Cutler, despite having no formal schooling, is a powerful driver, responsible father and a loving family man torn between that which he deems the final nail in the family’s coffin. He wants to save his son from Colby’s clutches and build a better future without his grandfather in the picture.

Overall, a great experience to screen in front of the whole family. Definitely worth your time.