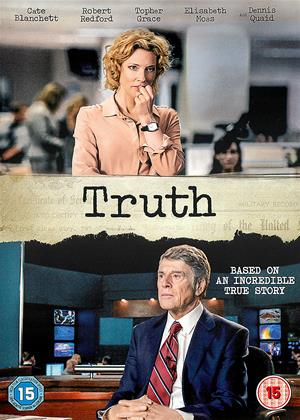 Excellent drama about journalism and honesty - Truth review by PV

This is a must-see movie - especially for anyone who's involved in the media or journalism in any way. It shows how the powers that be in the USA (and the UK) want to stop criticism of them by the media. The UK govt is at this very money trying to introduce legislation threatening to jail any journalist who reveals their secrets or blows the whistle.

All very US-centric but it would be being about the 2004 US election, George Bush and CBS 60 minutes.

The story of Dan Rather and Mary Mapes being caught up in the messy journalism scandal of the 2004 Presidential election questioning Bush’s service is one more interesting in its intricacies than the genuine drama. Notice how the film tries to evoke dramatic tension too highly by pushing an orchestral score for a somber cry or add intense shooting for looking up hateful online comments. A more accomplished film would linger on these events without theatrics but perhaps there just wasn’t enough material here that the Hollywood glaze needs to build up the strong casting with a higher atmosphere. I mean, you’ve got Robert Redford playing Dan Rather and need to make it seem like a big deal.

The performances are at least solid for a film that finds itself more preoccupied with staging dramatic scenes than focusing on the bigger issue, favoring the journalism more than the politics. Cate Blanchett plays Mary Mapes, stumbling onto what she believes to be the biggest story of the year. Sorting through a paper trail, she thinks she may have documents that highlight a hidden side of George W. Bush’s military service that could be damning. Dan Rather (Redford) trusts that Mapes can assemble a capable enough team to put all the pieces together for a strong television news piece that could be the biggest story of the election year. Their team consists of truth-seekers Mike Smith (Topher Grace), Lucy Scott (Elisabeth Moss), and Colonel Roger Charles (Dennis Quaid).

Though based on Mary Mapes' 2005 memoir Truth and Duty: The Press, the President, and the Privilege of Power, the film comes on real hard to force that drama. An investigation of questioning fonts and legitimacy of documents leads into an inquiry of question the politics and bias of Mapes and her crew. Some face slander from their own family, as with Mapes’s father who calls her daughter out as a liberal with a feminist agenda that shouldn’t be taken seriously. Mike Smith, desperate for a job and to reveal the truth, explodes with a scene questioning the very nature of CBS. But take note of how this scene seems to be more about Topher Grace’s acting of calling out the government and corporations which falls on deaf ears of the news offices. Shouldn’t there be more to this scene than just a surprising volume from such an actor?

It doesn’t come off as the least bit surprising that the CBS CEO, who is portrayed in this film as an overly scrutinizing overlord, found a film such as Truth to be lying. There’s a level of exaggeration present that always takes one out of the picture, where the subject of targeting George Bush becomes blurred in the haze of long nights investigating, sifting through countless papers, and calling debating on which documents could be faked in Microsoft Word. It feels like there should be more here but this film is less interested in the nuts and bolts of the investigation as opposed to its greater focus on journalistic integrity.

Truth is dishonest, yes, but also gives little light to its obvious target of holding up journalism to the importance that journalists must fight for uncovering what may be buried. Despite the great performances, what ultimately hinders the film is that its tale of oversight is just not that compelling or intriguing as other pro-journalist pictures of Spotlight or The Post. Both those films did an astounding job of showcasing the need for a free press while Truth merely tries to force that polish on an otherwise miscalculation in reporting.