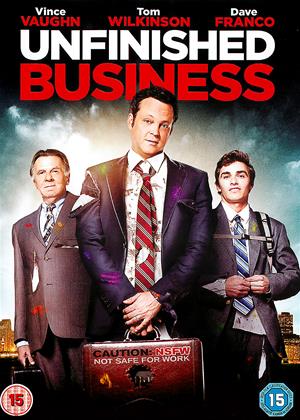 Stand away from the wall. - Unfinished Business review by NC

Vince is a verbal machine gun. You like him or you do not. Storyline is stronger than most, and Tom Wilkinson....he of Exotic Marigold......lends some extra class input. Little bit Hangover style but quite funny. Male genitalia now becoming common in films, and a fair display at one point in film, in case offended! Makes Step Brothers drum-kit attack look fairly tame..........Nick Frost still not losing weight..........

In the raunchy realm of dirty comedies, Unfinished Business appears the most baffling for the plot it weaves and the emotions it aims to evoke. It could have been a genuinely sweet film about men struggling to find their place in the business world and still be incredibly funny. With director Ken Scott (The Grand Seduction) and writer Steven Conrad (The Weather Man) at the helm, you’d have every reason to assume you’d be getting that type of movie. But rather than create something meaningful and human, Scott and Conrad have merely taken a gross-out comedy and dressed it up in a fancy suit of half-thought morals.

Vince Vaughn plays his usual smart-mouthed character with Dan, an employee so fed up with his investment company that he leaves Jerry Maguire style to start his own business. The only two who come with him are a laid off senior Tim (Tom Wilkinson) and young man Mike Pancake (Dave Franco) who just came from an unsuccessful interview at the company. Only a few minutes into the film and we’ve already hit one major desperation for comedy: funny names. Logically, of course, we’re going to get a lot of mileage out of the simple bit even if there’s no gas in the tank.

As the trio seek to close a deal - fearful that they’re being strung along and be out of business - their final phase is to make their partnership official in Germany. This leads to our European-style hijinks that one would expect from a comedy with no barriers for the low brow. Vaughn at one point tracks down an executive at a unisex sauna. Confronting the fit and nude woman, it’s no surprise that Vaughn ends up awkwardly nude and Franco ends up blushing at the sight of exposed boobies. Wilkinson is just happy to be there as he’s lost most of his shame. There are some surprises, but only in the form of gross gags. The gang later catches up with an executive played by Nick Frost is caught with his pants down and his genitals in a glory hole. Penis jokes are abound, but never a trace of creative comic timing.

Between all the genitals jokes, sexual encounters and bong hitting, there’s an amateur attempt at bringing a message into the mix about family. Vaughn’s teenage son is going through a rough patch of fitting in and he needs his dad more than he needs the special school mom wants to place him in. The few moments when Vaughn is connecting with his son over the tablet are pleasing if not artificial. You’d almost wish that they spent more time together, but considering how well Vaughn gets along with his family there’s no real drama to be had from his struggle. Despite his career hanging in the balance, we’re mostly just watching him hammer down some more nails for an already sturdy foundation. In comparison, Wilkinson and Franco don’t really have a solid arc or hardship - they just sort of end up with their happy ending without effort as if the universe owed them big time on karma.

Like a kid who hasn’t done his homework the night before, Unfinished Business turns in a slapped together excuse for Vaughn to crudely parade down his Old School roots once more. In an effort to be both heartfelt and gross, it’s a mess of half-thoughts that could’ve hit that cross-genre sweet spot if there were better written characters and arcs. Instead the movie just becomes a series of European-style bits where Vince Vaughn gets shot with paintballs, Tom Wilkinson comes on to a French maid and Dave Franco awkwardly attempts to lose his virginity. There’s no reason to care about them or their corporate deal since they’ll still end up perfectly on their feet if the deal doesn’t go through. If we don’t care about the corporate plot, why should they? Perhaps we shouldn’t overthink such an unfocused script in tone and just enjoy the comedy of Franco stumbling through a series of glory holes.