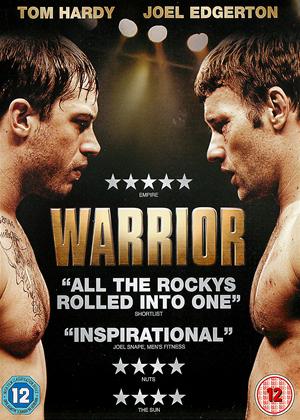 Plucky underdog wins cage fighting contest. Err – that's it. With a troubled family background two brothers (an ex-US Marine and a high school physics teacher) enter a martial arts cage fighting contest for the $5 million prize. Teacher wants it to pay off his mortgage, ex-Marine wants it to give to the widow of a comrade in arms. Teacher - who it turns out was once a former professional fighter (what?!?) - is the underdog. Ex-marine is filled with rage, powerfully built, knocks opponents out with a single blow. Father (reformed alcoholic) trains ex-marine. The contest is supposedly for the best 16 fighters in the world, but (of course) these two unknowns get entered for it and (of course) destroy their opponents while (of course) picking up a few minor cuts and bruises until plucky underdog (of course) wins with (of course) his wife cheering him on. All so predictable and with a silly happy-Hollywood-style ending to boot. On the other hand it is quite well done and the British and Australian actors playing the lead characters even manage passable US accents, so of its type it's a fairly good example. But – shades of 'Rocky' – haven't we seen this so many times before? It's just a cliché that goes on for well over 2 hours. And even using 'Ode To Joy' from Beethoven's 9th Symphony as part of the fighting accompaniment is a cliché: 'Die Hard' did this. I know that this is a popular film but I can only give it 3/5 stars at best – it really is very average stuff.

Two brothers slated to fight in a ring, no holds barred mixed martial arts, and a whole lot of angst and resentment – it must be the Gavin O’Connor-directed film ‘Warrior’.

In it, Australian Joel Edgerton is Brendan and Englishman Tom Hardy is Tommy, who play Irish-American working-class non-heroes and brothers, who suffer in life emotionally (they’re estranged with their alcoholic father Paddy, played convincingly by Nick Nolte), financially (Brendan has a family to feed and a mortgage to pay off), and physically (whereas Brendan fights on parking lots for extra cash, brother Tommy knocks heads to let off steam).

They are both dreamers although their dreams are way different. Think ‘Fighter’ with sibling rivalry and unconditional love and ‘The Wrestler’ with all the emotional and physical strain – only much better.

If there’s one thing ‘Warrior’ is not, it’s subtle. How could you when mixed martial arts pose nothing but sweaty men, muscles, and hard-core grappling that watching it already make you weak in the knees.

This is brutality as an art form and director Gavin O’Connor captures it with hardcore grace. The camera is unapologetic of the action going on – you will cringe and be at the edge of your seat. But what did you expect when brothers Brendan (Edgerton) and Tommy (Hardy) ultimately duke it out in a tournament dubbed as Sparta? The symbolism – whether intentional or not –

Biblical or mythological in aspect, can be a little heavy-handed. And yet it manages to highlight the immeasurable despair that its cast, surroundings, and situations emanate on-screen. It’s raw, sad, and hopeless but the Sparta tournament keeps everyone alive.

The most credible element of film is the perfect casting of actors Joel Edgerton, Tom Hardy, and Nick Nolte. As a fractured trio of father, sons, and brothers, they operate on a level of acting that is paramount to divert ‘Warrior’ from its campy premise. Had it not been for them, this would have been one of those ‘Rocky’ sequels that have become parodies of itself. Their anguish is real, painful, and unbelievably heartbreaking.