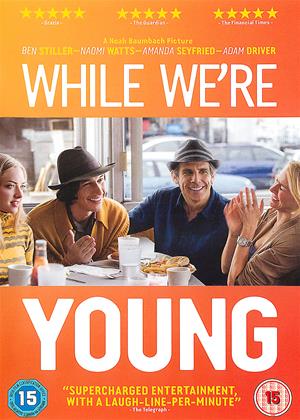 Reviews (3) of While We're Young

I am a novelist. Goldren rule of books is to capture your reader in the first few pages, grab his/her attention, really make them want to read on. Should apply to movies, too, right? Well, not this one. It starts in treacle, goes into molasses after 5 minutes, and sinks in quicksand after ten. I tried sticking with it, but turgid dialogue, and no humour or comedy anywhere in sight, killed it stone dead after 20 minutes. Maybe the remaining 80 minutes was great, but quite frankly I wasn't interested in finding out.

Not amazing, but pleasant enough - While We're Young review by CM

While We're Young is a film about aging. Josh and Cornelia (played by Ben Stiller and Naomi Watts) are a couple in their 40s who find themselves growing apart from friends who they were previously close to after the friends have a baby. (Josh and Cornelia are childless, having been unable to have a child themselves). In place of these friends, Josh and Cornelia start hanging out with a couple of twenty-somethings, Jamie and Darby, who they first meet after the young couple attend a lecture given by Josh. From here, the film explores how growing old affects our drive/ambition and our ability to be hip, as well as showing how middle age often brings compromises with it that are not necessarily part of a more youthful perspective on life.

Whilst the film was pleasant enough, to my mind it was not particularly revelatory or insightful about some of the challenges/changes associated with approaching middle age, and some of the points it did make felt a little clumsy. It does have its comic moments, but is more of a light drama than a comedy. Not a bad film, therefore, but not essential viewing.

Watch out for Midnight Run man Charles Grodin as the father in law! 80 years old! About the most interesting thing in the film, unless you are American of course.

Had it in comedy section, but when watched, is more like an acting movie/drama. Once again displays an uncertain and slightly unhappy side of American middle age.

Supposedly hilarious. Has some light moments, but has a sad, slightly despondent facet to it..........

I find myself on my 30th birthday wondering if I’m already over the hill. I know I’m not, but you can’t help feel you’re losing something by hitting such a milestone. Sometimes you need a little reminder that somebody else has it worse than you. While We’re Young is an angry wake up call that screams “You’re 30? Try being in your mid-40’s!” The disconnect between generations is a very interesting subject which director Noah Baumbach aims to tackle. And while he does say a lot with this film about the current generation of millennials and the changing of the old guard, it seems to run out of steam the way it descends into a rant of a picture.

Ben Stiller and Naomi Watts effectively play middle-age couple Josh and Cornelia who are not sure how to proceed with their lives. Their friends all have babies and they both try to rationalize not wanting to try for one again. They have had miscarriages in the past and can’t quite bring themselves to give it another go. A baby would just weigh them down, they say. Still believing they’re in the prime of their lives, Josh invites the young couple of Jamie (Adam Driver) and Darby (Amanda Seyfried) into their lives. Jamie admires Josh’s filmmaking classes and his previous work on documentaries that a mentor relationship begins to form around both their current projects. While they attempt to collaborate, Josh and Cornelia take in the lifestyle of the millennials - donning fedoras and taking in a newfound appreciation for rap music.

For the first half of the movie, there’s an interesting comparison between those separated by two decades. Josh and Cornelia have embraced the latest technology while Jamie and Darby favor the more retro chic. Josh watches the latest episode of The Daily Show on his mobile phone while Jamie watches The Howling on VHS. There’s some decent exchanges between the two as when Josh comments on Jamie’s taste in music for such songs as Eye of the Tiger (“I remember when this song was just bad.”). Josh and Darby even find themselves dipping so far into the activities of youth that they’re willing to attend mystical puking parties and dance clubs where they appear to be the only ones over the age of 40.

But when the plot finally forces our middle-aged protagonists to grow up, it starts to lose focus and turns in a rather odd twist that further disconnects the old from the young. It practically turns into a different movie when Josh abruptly goes from trying to find himself to blowing the lid off Jamie’s staged method of documentary filmmaking. There’s a recognition of the changing times, but only enough to present a challenge for our protagonists to find happiness. It’s a journey that is an important one worth taking and with a satisfying conclusion, but its plot takes a major tumble to get to that point of realization about what’s important in life and how to live among others outside your age and status.

While We’re Young may be slightly uneven and even a little mean in its focus, but it manages to come out as a decent bit of wry comedy mixed in with societal commentary for accepting your age. Noah Baumbach finds some humor in all the distance and isolation that comes with age by creating three-dimensional characters with real dialogue. And, unlike Judd Apatow’s This Is 40, he doesn’t wallow too deep down the well of depression by finding the bright side of being middle age. Such a comedy doesn’t make me jump for joy at what awaits me in the next decade, but it does provide a bit of contentment for getting older.