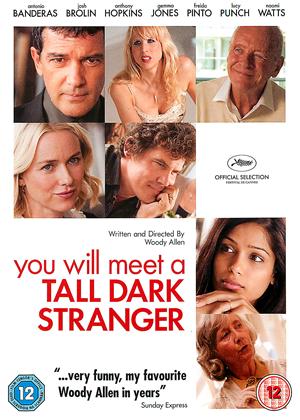 Rent other films like You Will Meet a Tall Dark Stranger

Reviews (3) of You Will Meet a Tall Dark Stranger

I loved this film - I thought it was funny, witty, full dark ironies and great characters - and actually quite true to life too sometimes. This is amazing for me, because I usually HATE Woody Allen movies - and I mean REALLY hate them. His other movies leave me cold and I find them totally unfunny, but this is a wonderful characters comedy. Of course, the usual suspects will complain that it's not realistic and doesn't show a true picture of London - of course it doesn't, it's not a documentary of social issues set on a sink estate! But this film just really made me laugh: I know people just like the ones portrayed in the film - I particularly liked the gold-digging female characters, and also the failed writer character. Tony Hopkins also shows he can do comedy! This is the best Woody Allen film - ever! And the only one that made me laugh!

Started off well but got worse as it went on. Sudden and incomplete ending, which i guess was the point, but somehow totally dissatisfying

Ensemble Comedy. - You Will Meet a Tall Dark Stranger review by Steve Mason

Woody is back in London and again pondering the affairs of upper middle class couples in an exuberant if unexceptional comedy drama.

Anthony Hopkins (Alfie) feels the breath of mortality on the back of his neck and abandons his wife Helena (Gemma Collins) to despair when he leaves her for a pneumatic sex worker/actor. Meanwhile Alfie and Helena's daughter, Sally toils in an atelier/gallery and is attracted to her handsome boss Greg while drifting apart from novelist husband Roy  who is falling in love with their beautiful neighbour. So it's farce.

The main point of the film is about faith and whether its lack of intellectual validity matters if it allows its participants to recover from the trials of life and to find peace and meaning. In this story the belief is in fortune telling, and Craven is wonderfully frustrating as an elderly woman who chooses clairvoyance and spiritualism above her family. Hopkins also scores as the retired man whose awareness of the void opening up ahead makes him throw everything away for another go around with the most inappropriate partner. His frozen expression of bewildered fear is quite something.

There's a great subplot featuring Brolin stealing the brilliant first novel of a friend believing him dead, but then finding he is in a coma from which he may or may not recover. It's typical late Woody Allen. It's not among his best, but it's still fine entertainment with sharp dialogue that doesn't drag for a second.

Woody Allen returns with another film set in London (the recent ones being ‘Match Point’ and ‘Cassandra’s Dream’), this time writing and directing another ensemble who fall in and out love, are cheating and beating cheated upon, without regard for others’ and their own sanity.

Former senior-citizen couple Alfie (Anthony Hopkins) and Helena (Gemma Jones) have recently separated; Alfie takes a much younger woman – a prostitute – as his new bride while jilted Helena dabbles in spiritualistic activities, seeking the fortune-teller’s prediction that she will meet a ‘tall dark stranger’. Their daughter Sally (Naomi Watts) who works in a gallery is married to Roy (Josh Brolin), an author.

He feels down for having not written a follow-up to his first novel yet. Like Sally’s parents, their marriage has issues; she’s infatuated with her new boss (Antonio Banderas), and Roy has just fallen in love with Dia (Frieda Pinto), a young Indian girl who lives across the street. In this complicated maze of relationships, newly-formed and disintegrating, lies the story of ‘You Will Meet a Tall Dark Stranger’.

It is quite troubling that the people in this film find it so easy to commit infidelity. You’re made to believe that people are just naturally flighty without consciences or throw the word Love around like they’re bread crumbs for birds to peck on. Alas, such is the theme of most Woody Allen films. Of course, loyal married couples are boring, nothing to explore there. With infidels however, you’ve got romance dramedy gold.

Unlike other Allen films though, ‘You Will Meet a Tall Dark Stranger’ does not contain the same charisma of other Allen features. It lacks wit, glib, and tries at quirky but ends up contrived, unfunny, and annoying. I suppose that’s what the film wants to point out: Cheating is stupid. Stupid people cheat. But what lies beneath all the cheating is a much more hurtful truth. Maybe discontent, selfishness, or the idea that maybe these people are just bored out of life and in each other. And the quickest way to re-animate their already set lives is to complicate things more.