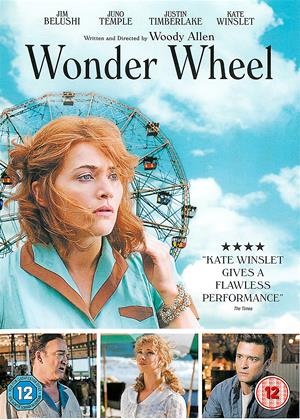 I enjoyed this “ play filmed on location” movie.

The Coney Island setting is superb as is all the acting, with Kate Winslet outstanding.

The Woody Allen script is original, entertaining and keeps you guessing as to where the story is going.

Draws You In - Wonder Wheel review by KW

A classic Woody Allen film, full of intricacies that draw you into the film, even when it is not one of his best. However I still am at loss as to the plot line need of the story surrounding Kate Winslet's characters son!

It seems a real shame for all involved that the real-life controversy surrounding Woody Allen ended up making this a box-office bomb, with not even a UK blu ray release available, as I found it a surprisingly solid drama. It's not perfect - it's a little on the melodramatic side, and it feels quite 'stagey', but the central human drama is very engaging with a real mess of tangled love lives, and the acting is solid. I'm not a huge Woody Allen fan, so haven't seen huge swathes of his work, but I found this an interesting and worthwhile watch - even on slightly fuzzy low-definition DVD.

Not one of Woody's best. - Wonder Wheel review by JR

This is Woody coasting, well within his comfort zone. But Woody on a bad day is better than most other film makers on a good day. The cinematography is reminiscent of fuzzy, super-saturated colours of fifties movies. Most scenes are indoors and feel very stagey - it feels like a play rather than a film, and some of the dialogue is stilted and clunky although there are many allusions to the classics and Shakespeare. The casting is problematical and I was not convinced by Winslet's performance which was one dimensional playing a very shrill and moany woman, and Timberlake was rather wooden.

Who will complete Woody Allen's last film? This is hardly a tasteless question, for the end of life recurs in his films (notably, the remark in Annie Hall that all the books with Death in the title belong to him). Such is his continuing rate of production, with several works on the go at once, that, amidst one's own life, it is sometimes unfortunate to miss a new one. Three years on, Wonder Wheel (2017) turns out to be rather a treat.

It could have been called Carousel, for that ride - operated by James Belushi – figures more prominently than the eponymous one which towers over a skid-row Coney Island fairground in 1950 where, on the beach, Justin Timberlake, fresh from the Navy, spends a summer as a lifeguard while aspiring to be a dramatist.

Will he succeed? Well, as he admits, in his addresses to the camera, he is caught up in one forthwith. As the sun sets he had chanced upon Kate Winslet, a former actress about to turn forty and unhappily married to alcoholic Belushi who took her on after she had been unfaithful (with somebody else) to her jazz drumming first husband. She has baggage, made worse by now waitressing in a clam bar.

Under the broadwalk, passion smoulders, flares - an apt metaphor, as her young son (an excellently obnoxious Jack Gore) is given to setting things on fire. All this is set against red-hued cinematography which makes something lush of rundown premises, almost as if the wheel glimpsed from inside makes the glazing appear a stained-glass window. Events are further lit up by the arrival of Belushi's daughter (Juno Temple) who had run off to marry a gangster; such are gangsters, that husband turns out to be more displeased than most at being treated in this way by a dame.

This is perhaps to say more about the plot than one often might do when reflecting upon a Woody Allen film. It is better constructed than, say, Bullets Over Broadway and it has no gags at all. For those who did not relish Interiors and September, this might sound ominous. A more apt comparison is with the charming period quality of Radio Days, and it is all more convincing than the spate of Europe-set works - including Midnight in Paris, which felt like a New Yorker sketch extended to a hundred minutes.

Woody Allen has always been terrific in giving women good, challenging rôles, such as the one for Mia Farrow in Broadway Danny Rose (and even Madonna in Shadows and Fog). Here, Kate Winslet is upon the screen for much of the time (one does not get out a stopwatch, that is simply how it feels). And what a performance it is, suspending one's disbelief at such brilliance, such a flow of lines being given to the depiction of an actress who had seen her skills, her life slipping away with her face. This is worthy of Eugene O'Neill - had he been able to rein in some of his harbourside histrionics.

Not for me. - Wonder Wheel review by KF

Well, I thought it was a dreary American drama and I hated the Coney Island setting. I wasn't impressed with the dialogue or the story line and I was deeply disappointed that Kate Winslet would sign up for this.

I am always surprised when Woody Allen writes a drama. I'm surprised because usually Allen is famous for his comedies. The script, the characters, the actors are excellent because authentic. We are entertained as we are learning about life. I find it disgraceful that his films have a very limited distribution because of a woman's diffamation. It has been prooved but not on the first page of the papers.

An acknowledged homage to the Eugene O'Neill influenced realist cinema of the mid twentieth century (I'm thinking Clifford Odets without the politics). While the bright, warm primary colours of the photography are gorgeous, it might have been more appropriate to be filmed in black and white as those films were.

It is conceived as a stage drama minimally opened up for the screen, focusing on a family trapped in Coney Island in the fifties, who like the big wheel of the title, keep on moving but never get anywhere.

Woody's mannered dialogue feels appropriate to this historic setting. Kate Winslet delivers the kind of customary strong female lead performance which Allen seems to endlessly be able to draw upon. The story begins slowly but builds to an effective dramatic climax. It's well plotted and ends on a clever, dramatic sleight of hand.

The location is a very enjoyable, nostalgic but expressionistic reproduction of Coney Island in decline. Wonder Wheel is far from the disaster it was reviewed as and deserves to be re-evaluated some day. Perhaps it will earn another life on the stage.