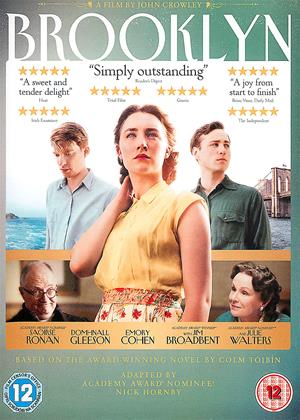 Okay, let's get it out front. I don't like action films, or superheroes, or car chases, or amazing special effects. I like films that quietly illuminate the depths of people's lives. Nothing much needs to happen other than that you follow the developments and contradictions in the lives of characters you can really care about...that something in the film tells you a little bit about the struggles in your own life. If that's what you like, too, then I'm pretty sure you'll love this film. I don't give many films five stars. 'Nuff said.

Excellent film. Fine acting all round. Deserved a better exposure - I ahd not heard of it and took a chance. Nice Nick Hornby screenplay. Not lavish, unlike the overhyped La La Land, but a much more pleasing experience. 1950s location spot-on.

Loved everything about this film - Brooklyn review by RW

I hadn't heard of this movie so took a chance - I'm so glad I did. Exquisite acting, beautiful cinematography and a gentle but entertaining plot. Just delightful.

At last a well acted film. - Brooklyn review by NC

No computer graphics, no exploding livers, yet can sit and watch all the way through without loss of concentration on what is going on. Used to be called "acting in films".

Combine film with Canada etc, which always seems to work well. Not a multi million dollar budget i suspect. Must really annoy Spielberg and Brad etc.

A slight but engaging tale of a young woman's escape from a claustrophobic provincial existence in 1950s Ireland to the exciting possibilities of big-city life in New York. Saoirse Ronan is the beautiful, fresh-faced ingénue torn between lovers poor and rich, as well as loyalty to her past, whose mind is finally made up by the stifling bigotry and wagging tongues of Irish country life. It's a story full of charm.

I didn't have the chance to see this at the cinema so was really looking forward to it. I wasn't disappointed. The characters were strong and Saoirse Ronan was brilliant. I would definitely recommend this.

The trailers had lead me to expect a slightly different film to the one I got - and I was much more pleased with it that I expected to be.

The ability of Saoires Ronan to act her socks off with the slightest twitch of her face makes this film into an amazing insight into one person's fear, longing and growth into confidence.

A wonderful, wonderful film which is as beautiful as it is powerful.

I thought I'd like this a lot, and had heard good things about the book and the film, but it was a hard slog.

Everyone and everything in Ireland and in Brooklyn was terribly clean and well scrubbed, with none of the drear and grime that you would associate with the era. Although they went to the trouble of filming the Brooklyn exteriors in Montreal as Brooklyn looks, apparently, too modern, the brownstones in Montreal look as if they might as well be in Williamsburg, and they might as well have been filmed on a backlot for all the atmosphere they generate.

Add a boring, linear and predictable plot plus the most irrational behaviour from the lead character and throw in a one-in-a-million coincidence "twist" before winding it up with those deadly cinematic devices all in a row: slow-motion reunion, patronising voice-over and freeze frame. It's a hard, if not impossible film to warm to, just a series of cliches and soap operatics as well as cloying Oirishness, to be sure. You don't have think too hard to know what kind of role Julie Walters plays, and Jim Broadbent appears as Barry Fitzgerald. A major disappointment and a waste of time.

Brooklyn is beautifully acted and filmed, but has ponderous pacing, and is just a bit dull. The plot follows an Irish girl emigrating to the USA and making a life for herself in New York. To describe the plot further would spoil the movie, because there really isn't very much more plot to describe. I can see why this film would resonate with an Irish or Irish-American audience since it deals with Irish emigrant experience, but others may find themselves dozing off.

What's all the fuss about? - Brooklyn review by BE

Seen at the cinema. Although it is well crafted, I found the movie to be plain, tedious and ultimately depressing. It may be that I can relate the scenario to a period in my own life. Julie Walters just plays Julie Walters. I am not a fan.

This is a beautifully crafted and emotionally engaging film for the most part, helped by a very good script from Nick Hornby and a cracking central performance by Saoirse Ronan. I thought the first half particularly good at documenting the immigrant experience. However, a weaker second half, the result of the main character not revealing even to her own mother something that in real life she would have done in an instant, spoiled my enjoyment considerably, and left me feeling rather ambivalent overall. What was the point of it all? So, worth a look, yes, but ultimately a fleeting half-pleasure that promised much but did not quite deliver.