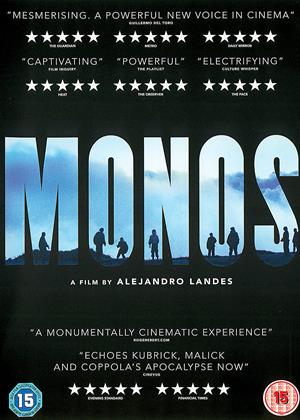 Wasnt for me - Monos review by TH

I was hoping this film would be interesting but I struggled to engage with it. The film aims for a documentary style but its painfully slow but didnt feel it paid off. Lost interest after about half hour and didnt grip me back in. If you like art house films you may like this.

Without the benefit of a great novel like Lord of The Flies, this is an Art House movie for people who like to puzzle what the hell is going on? A bunch of teens with guns indulging in petulant playground frolics. No budget, probably improvised and made up as the Director felt in the mood. Be warned Mark Kermode recommended this film. He is known for his occasional duping of the public by recommending a film he thinks is 'interesting' and a bit different. But then he recommended the usual Marvel mashup Black Panther. which was just another worn out plot super hero movie.

If you want entertainment to be part of your movie experience whilst still be provoked into thought, forget it. This is boring and confused. Up to you but I can only recommend you avoid this dire nonsense.

A 3-star narrative is elevated to a 4-star film experience by the dangerous beauty of the settings and the excellent camerawork.

The lighting is incredibly good throughout, helped by a superb palette of stark colours.

In some respects the film owes a lot to both Lord of the Flies and Apocalypse Now, but none of the characters are well enough depicted and developed to merit closer comparisons to those great works.

However, this is a striking movie that holds the attention from start to finish.

Boring, poorly shot, mostly score-free, documentary-style Columbian film – the kind praised by ridiculous arthouse critics before being rubbished by any discerning movie lover. It begins as a right-old mish-mash of scenes of teenage rebels playing soldiers in the wilds. If you stick with it, which is unlikely, it ends up in the jungle, where they continue mucking about.

The Making Of doc on the DVD shows that the director had all the equipment and resources needed to make a good film, but the amateurish end-result looks like a student’s first attempt.

No idea how this got to my list, probably followed a recommendation of a critic. Watched for about 5 minutes and gave up. Totally un-engaging.

Lord of the flies with guns - Monos review by PT

What happens when you free a bunch of adolescents from any societal or parental constraints and put them in the jungle with access to heavy armaments, drugs, alcohol and a cow (Plot spoiler - it doesn’t end well for the cow)? Well this film confirms exactly what you would expect. Everything is going to go wrong and the film’s undeniable tension comes from anticipating just how bad that is going to be. The absence of any context for these events, an unidentified revolutionary (presumably) group of unspecified ideology in an un-named jungle, means that the word METAPHOR hangs heavily over the film.

That said, there is much to admire in the film’s construction. It is visually impressive and Mica Levi’s mostly abstract soundtrack really adds to the relentless drama. I would suggest that Alejandro Landes is a director worth looking out for in future.

To sum up: 4 in anticipation (Mark Kermode really liked it I recall), 2 for enjoyment and 3 in retrospect.

Fooled again! - Monos review by BE

As previously mentioned in review by HM - duped by a Mark Kermode recommendation. Didn’t even last half an hour with this one. I should have known better!

I thought I would briefly offer my positive opinion of this film to counterbalance some of the aggressively ignorant reviews that others have posted on here (you know the type, the people who pejoratively use the phrase 'art house' to sneer at any slightly non-mainstream film which has enraged them). HM states in his/her review that Mark Kermode is "known for his occasional duping of the public by recommending a film he thinks is 'interesting' and a bit different" - what HM means of course is that Mark Kermode sometimes given an opinion which differs from that of HM, which is not the same thing. Another reviewer, Alphaville, believes this film is "the kind praised by ridiculous arthouse critics before being rubbished by any discerning movie lover" - again, what he/she means to say is that some critics have offered an opinion different to his/her own.

Anyway, now that I have got that off my chest, I will state my opinion that this was a very engaging, atmospheric, immersive and brutal film.

TE states that "none of the characters are well enough depicted and developed" - this is a fair point but I believe it is a mistake to consider this a weakness of the film. I would argue that one of its fundamental themes is the state of arrested development which child soldiers have forced upon them. Every aspect of their lives is controlled by brutal authoritarians - they even have to request permission to enter into relationships with one another.

The film is brilliantly acted by a cast of mostly non-professional actors - with the incongruous exception of one of the stars of Disney's Hannah Montana show - and I found it gripping from start to finish.

This a brutal and at times quite disturbing film which reminded me of Lord of the Flies. The interest is really in the tensions between individual wills and the values of the group, and how individuals are controlled by the discipline of the older leader and the rules within the the organisation. The move from the hills to the jungle makes the locale a lot more interesting and the film gets steadily more violent as the stakes are raised. A good film of this genre but a bit too dystopian for my personal taste.

A strange, beguiling and yet fascinating film set in a country similar to Columbia or Bolivia where on a remote mountainside a group of teenage soldiers undergo training for a shadowy organisation. Ostensibly they are there to guard an American hostage (Julianne Nicholson) but indulge themselves in horseplay and sexual experimentation. Eventually circumstances drive them in to the jungle where their team spirit becomes eroded and violence ensues. There is a clear Lord Of The Flies narrative at play here and a thematic message about child soldiers. This has received plaudits but I found the film difficult to penetrate satisfactorily mainly because much is left unexplained. This might appeal to many but I found it just too enigmatic to be enjoyable. Interesting and intriguing so worth checking out.

Brimming with coming-of-age fury, Monos is the type of cerebral experience that boasts an unsure and cruel nature to that of loyalty and rebellion. The cast is an ensemble of young teenagers, located outside the bounds of society. They’re a close-knit group who survive on a primal extinct which rather than degrading into civility merely becomes a weapon of the dangerous. These teens do their growing up in the woods, armed with guns and bound by their urges under the distant gaze of authoritarian others. Growing up is already a tricky enough challenge in the civilized world that it’s made all the more complicated by the wilderness dwelling pack more focussed on who to have sex with, who to betray, and who to kill.

The eight teenaged guerillas are given very little. A squat commander visits occasionally and contacts them over the radio with instructions. The guerillas are placed in charge of a hostage adult woman as their duty to guard and gifted a cow as their means of nutrition with its milk. But the guerillas are only children and not as comfortable enough with themselves to properly handle this situation without going all Lord of the Flies on this situation. It doesn’t take long for the guntoting kids to accidentally kill their cow, leaving them to eat the meat and figure out who to blame for the incident.

The outside world seems so distant and even non-existent within the picture at times. We’re exposed to these teens through slow and troubling thoughts. They exercise with extreme motivation to be faster and tougher. They celebrate birthdays with beatings and laughing. They party the night away around a fire with tribal shouts. They experiment with kissing in comfortable and explorative ways. Even attempts by the kidnapped doctor to understand them is an act of awkward confusion. She at one point attempts to reason with one of the girls that can she can help get them on television if she is freed. The doctor tries to show affection but this is misinterpreted as the erotic by the child and irks the doctor. The child merely laughs. It’s all just a game, even when guns are involved.

The tension continues to mount as some of the teens take note of their superiors and decide to stage their own cout. If they believe themselves worthy enough in combat, they figure why they even need someone to take orders from. Some doubt they can pull off such a stunt while others go along with the striking out to fulfill their desires. Some get what they want while others are tortured. Some survive while others do not.

The film takes an interesting route of trying to find some place for the teens as they ascend into adulthood. One ventures off on his own and discovers a family living in the jungle. He is taken in, fed, given a place to sleep, and has plenty of children to play with. It’s a nice life, but can it last? This is questioned not just because of the boy’s past but for how he is targeted by the rest of the group. A brutal pack mentality threatens his very existence. The violence only mounts when the children realize they’re losing a grip on loyalty, yet they’ve lost control of far more than that.

Monos was directed by Alejandro Landes with great care of letting us peer into the minds of youth bound by war and primordial in their wants. The tension and reveal of the situation mounts ever higher that by the final frame we’re left with a difficult question: What’s to be done with the teenagers that pursued a dark path? Is there hope for them? Can they find a way back? More importantly, however, will we let them? These are not easy questions in a film that is tough to watch yet speaks with such introspective intelligence it’s impossible to not be moved.