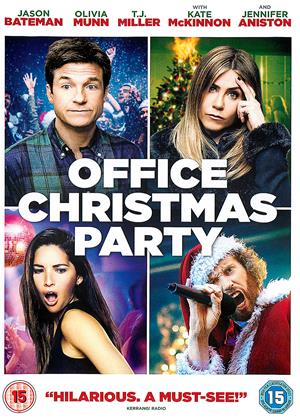 Fairly inoffensive compared to some. All good fun had by all. Not really too embarrassing or cringeworthy either. All characters fit together pretty well, despite the amount of them.

Should be better - Office Christmas Party review by AW

With the stars on offer, this should have been a lot better. Definitely the American version of funny, which has a great deal of predictable slapstick, no subtly at all. Having said that, the story was slightly better and it's always remarkable to see Jennifer Anniston never seeming to age. How does she do that? Worth watching, but don't expect too much.

Normally I would like a film with Jason Bateman and Jennifer Anniston in. But this isn't funny. It also contains a lot of unnecessary bad language. I don't mind bad language in the right context but it is not needed here. Very unfunny film. Gave up about half way through.

Oh boy. Office Christmas Party is a film directed by Josh Gordon and Will Speck, starring the usual comedic hand-for-hire T.J. Miller, stoic but misunderstood Jason Bateman, the “always aloof with sinister intentions” Jennifer Aniston, generic typecast Olivia Munn, and a plethora of other actors who try their best to avoid looking like they’re in it for the check only. That isn’t to say that Office Christmas Party isn’t a funny movie, but quite the contrary: it’s funny to a point when it stops being funny and starts being unfunny. If you find the previous sentence lacking in any comedic or depth of wit, then now you know how I felt while watching this holiday excuse of a comedy.

The film starts with Clay Vanstone (T. J. Miller), who is some kind of a hot-shot in the Chicago branch of an IT company, uncreatively referred to as Zenotek. However, a conflict brews in the background since this branch is losing money at an alarming rate, and so Zenotek CEO Carol (Jennifer Aniston) threatens Clay to close the branch without second guessing. Oh and by the way, in an unfortunate twist of a modern farce, Carol is actually Clay’s sister (WOW!). Therefore, Clay has to come up with a creative way of showing why and how the Chicago branch brings value to Zenotek. Hilarity sometimes ensues (but more often than not – it doesn’t).

Some of the biggest issues that plague this holiday-based flick are the bland and uninspired story which wastes the majority of this (somewhat) talented cast. This is clearly reflected via the borderline passable performances by both Jennifer Aniston and Jason Bateman, actors with proven talent who sleepwalk their way through this exercise for a simple paycheck. Yes, you have to earn for a living, but someone has to explain to these guys the simple economics of supply and demand: the more people watch your film, the more money comes down the funnel; this makes the producers happy and thus an industry escapes bankruptcy. With this tempo, Hollywood comedies tether across a thin line and it’s only a matter of time before the machine snaps the line and all goes down the drain (meaning: no more comedies, especially true for ones of the “holiday” caliber).

The film has some strong points, mainly found in the decent performances of T. J. Miller and Kate McKinnon playing Mary; but these are far and few between and feel as if the viewer is treated with the icing without the cake.

All things considered, I guess Office Christmas Party can pass for a drunken evening of contemplating your own trajectory in life without feeling suicidal and or/overtly emotional. If you’re not that deep down the abyss yet, this movie may very well not be your optimal choice for that evening.