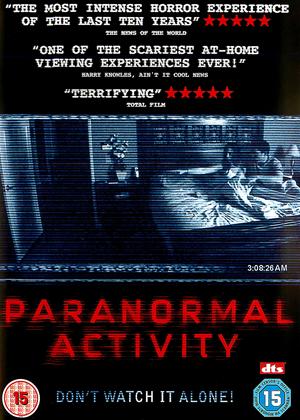 Synopsis:
This is the story of Katie and Micah, a carefree couple who become haunted by an unseen presence in their house. They decide to investigate the increasingly bizarre and escalating intrusions by setting up a video camera to capture evidence of the demonic presence in their house, only to find much more that they ever imagined.
Actors:
Katie Featherston, Micah Sloat, Mark Fredrichs, Amber Armstrong, Ashley Palmer, Crystal Cartwright, Randy McDowell, James Piper
Directors:
Oren Peli
Writers:
Oren Peli
Studio:
Icon
Genres:
Horror, Thrillers

Much has been made of the Paranormal Activity low-fi budget, which for many delivers more frights and nightmares than many major horror films of late. That isn’t saying much and I didn’t find the film particularly scary with the ending in particular being out of place, seemingly re-filmed after a suggestion by Spielberg none the less. It shares much with the Blair Witch Project and if you couldn’t stomach the shaky hand held camera of claustrophobic minimal, argumentative cast there, then this certainly isn’t for you. At least the female lead is not as soul destroying annoying as Heather Donahue’s backpacking ranter and you do feel some sympathy for her plight. Lacking the finances of Cloverfield we’re left to follow this couple in their new house where divisions appear within their relationship, as the strain of unexplained events becomes increasingly menacing. You’re meant to believe this is real and you’re fortunate enough to be viewing these tapes as a historical piece of evidence, following the chain of events to a rapid fire conclusion. The cast in Paranormal Activity perform well, showing you don’t need huge names or a massive budget to produce some interest, atmosphere and emotion. If you’re of a nervous disposition then this is not a film you should watch with the lights off or the sound on; just keep that pillow handy.

What a let-down! - Paranormal Activity review by Mehitabel

I fell for the hype. I was expecting something truly unsettling and frightening.. and got a rather dull domestic documentary. I'm all for scares being hinted at rather than spelled out, and I don't like loads of jump-moments, they get tiring, but there's only so long you can go on believing something's about to happen.. The handheld shaky-camera/amateur thing is now a cliché and to expect it to compensate for lack of fleshed out characters, plot and real scares is feeble. Perhaps it would have helped if the couple hadn't been so uninteresting..

The only reason I can think of to watch this is just to say you have. But I suppose that was the point of all the hype in the first place..

Not what I expected. - Paranormal Activity review by CP Customer

. I'm normally not a fan of these home camcorder type of movies, but this one is different.

I can honestly say that this film made every hair on my body stand on end repeatedly, and the ending was superb.

The effects of ‘The Blair Witch Project (1999)’ should never be underestimated in my view. With it came to many peoples’ attention a whole new way of telling (mainly horror) stories: found footage. It was a phenomena, a huge low-budget hit. The inevitable backlash from the fickle public mainly whinged about the effects of ‘shaky’ webcam making the delicate souls in the audience feel queasy. Imagine then, if a film could be told using static security cameras endlessly filming every room in a haunted house. Perfect! For a limited time, it was certainly very effective.

Katie and Micah live in the unlikeliest haunted house. No dank corridors or Victorian era décor – this is a thoroughly modern homestead devoid of dank shadows and possessed cellars. The couple are likeable and real, and Katie Featherstone and Micah Sloat are naturalistic performers and have a certain casual chemistry. The production is genius in its simplicity. Watching stilted views of familiar rooms command the attention, dare the audience to examine every inch of the scene for any sign of unnatural movement – and even if nothing happens, there is growing tension merely in being so drawn into it.

Micah’s scepticism in the face of visiting psychic (Marc Fredrichs) marks him out quite early as fairly vexatious, especially when Katie seems to have been sensitive to paranormal activity from a young age. And yet every horror film needs a sceptic. I remember being very irritated by him when I first saw this, but watching again, I find he is a lot more understanding than I gave him credit for.

Unspectacular occurrences are a lot more effective because they are filmed as ‘live’, and we get the couple’s instant, undiluted reactions to them. The scene where Katie is simply standing beside the couple’s bed, staring at Micah’s sleeping form, doesn’t sound much on paper, but is incredibly sinister. Such moments, gradually built up throughout, are simple and unnerving – far more so in this film than in the numerous sequels and prequels, which desperately introduce new characters and build unreasonably on the ‘curse’ (which is not that interesting) to try to maintain the interest. To my mind, the only sequel that works is 2014’s ‘The Marked Ones’, because it is a fairly self-contained ghost story in its own right.

Yet ‘Paranormal Activity’ should have remained a very effective one-off, in my view. Its huge success persuaded Paramount Pictures, who had bought the film from its original independent distributors, to add a new ending, which would then lead into further numerous ways of wringing money from what had become a new franchise.

At the end of my first viewing of this, I had to turn all the lights on in every room, just to make sure there wasn’t a figure standing there. A sure sign the film has done its job …?