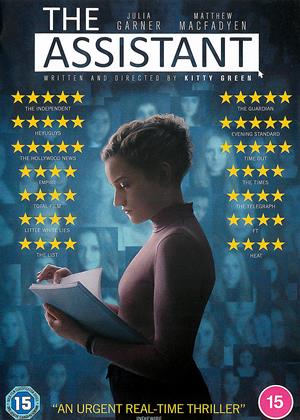 Reviews (25) of The Assistant

If your idea of an interesting movie is to watch a sad young girl photocopy in an office over a single long working day, then this is the movie for you! Otherwise I would suggest that you find something else to do during the screening of this movie, read a good book perhaps or some DIY?

One DRAB movie!! - The Assistant review by S.S

One of the most drabbest, boringest movies i have ever encountered, there is no story line what so ever, it drags on and ends abruptly and you think to yourself is that it? I thoroughly hated it every minute of it, it was a waste of my time. I can't believe people have given it a misleading 3 stars, it's not worthy of a half star even to be frank! It drags on, and it claims to be a thriller, what part was that then? That's lies, it's no thriller, it's one drab, boring waste of your time movie lol ... Worthy of half a star if that! ... Yawn!!

This very subtle but extremely powerful film shows us a day in the life of Jane, a young graduate who has started working at a film production company with the goal of ultimately becoming a producer. The film starts as it means to go on, with Jane walking into the office first thing in the morning, director Kitty Green spending the first 20 minutes showing Jane's many mundane duties (taking calls, booking cars, cleaning floors, stacking bottles, washing dishes etc) in real time. But for whom is she doing all this? All we get is an important “he” who everyone knows, everyone wants to impress and everyone talks about - the fact that we don’t get his name or his face is a clever touch.

There's not much in the way of 'plot' which might frustrate many (and clearly has some press reviewers!), but the film is strongest in its silences, entirely in control of a subtext that screams without making a sound; it's clearly inspired by stories of Harvey Weinstein’s years of criminal behaviour with women in the film industry, but there's little direct reference to this, or in fact to any names that might seem too familiar other than a film festival (Cannes) or a crime scene (Beverly Hills’ Peninsula hotel). This approach works brilliantly, as it treats the viewer as intelligent enough to read between the lines and shout back at the screen with every micro-aggression thrown at Julia, even when she won’t let herself say anything. The most compelling scene sees her come close to breaking, as she sits across the desk of HR manager Wilcock, whose low-key but terrifying dismissal of Jane's complaints are compounded by his attempt to turn the tables on her and make her seem like the one in the wrong. Back in the office, meanwhile, her co-workers treat it all as a joke - the complicity of everyone in the company being obviously one of the main issues the film explicitly criticises.

Julia Garner is wonderful in the role, her facial expressions always speak volumes; her eyes seeming to remain dry through arduous effort. She makes it easy for us to draw parallels with so many real-life stories of distrusted women staying silent in unfair situations for too long. Without cliche, without melodrama, the film portrays an ongoing cultural evil with intelligence and some sophistication.

6 out of 14 members found this review helpful.

We were expecting great things of such a good actress but the film went nowhere and then it finished. A particularly boring day at the office with lots of photocopying and dull phone conversations... The critics loved it - a case of The Emperor's New Clothes maybe?

Not worth the time - The Assistant review by Ed

After 10 minutes, i put on a facial mask.

After that, i did a manicure.

Now i’m ready to apply for the job of assistant as that is all i saw. A girl doing her job. Very dull. Maybe i wont...

No subtitles so couldnt watch - The Assistant review by SW

Why on earth in this day and age does a 2019 film have no subtitles for the hard of hearing. We tried to watch it but the main character's diction was poor so we had to give up after about 20 minutes.

why is in under the genre "thrillers"? - The Assistant review by LJ

there is nothing "thrilling" about this film - if you like watching paint dry, then this is the film for you! it ends so abruptly I was left wondering if the DVD had been damaged!

Total waste of time. - The Assistant review by SKC

One of the most boring piles of crock ever presented as a film. It is one of those films where you can actually make up the storyline yourself. Suitable mainly to female snowflakes who need a safe space to create their own notion of victimhood and entitlement. In fact I do not even remember adding this to my list because there is nothing of appeal when I click on the link. that would make me add to the list. I must have been very drunk.

The banality of evil - The Assistant review by JB

A commentary about a monster at the heart of a system which continues to enable him, The Assistant has the steady low hum terror of a classic horror film but the difference here is how real this situation is.

The excellent Julia Garner is the titular assistant, just five weeks onto the job in a Hollywood producer's office, has already seen too much. She has the look of someone genuinely haunted, as we follow her around a day's work - dealing with the wife of the producer, cleaning up the drugs on his desk and women's underwear on his office floor and writing apology emails for the times she's upset him. Like a monster movie, we don't see him for a while but his presence is always felt - partly in the actions of other office staff who've been long inducted into perpetuating the culture of sleaze and worse. They crowd around the assistant's desk when she's writing emails to him parroting to her the words he wants to hear.

It's a quiet, slow but immensely powerful film, even more remarkable because it does this with a lack of much music and minimal on-screen dramatics. It's about the small things which are symptoms of the bigger things, the everyday examples, the banality of evil. We don't see the sexual abuse so widely reported - but we see its shadow everywhere. The open, ambiguous and quietly horrific ending also asks whether the assistant will become part of the system, too.

Understated and intelligent, just not very enjoyable - The Assistant review by RB

I’m sure this was a very cathartic process for someone, but ultimately it’s not great entertainment, especially for anyone who works in an office. It is however well made and we’ll acted

The movie takes place over the course of one day in Jane's life: she is a junior assistant who has recently started working at a film production company in New York City. Julia Garner is excellent in the restrained way that she plays the part: her raw emotions can be read easily, even though she struggles to curb them. She works long hours and is, in effect, the PA to the CEO, who is a barking, foul-mouthed bully. The film, no doubt, is inspired by the Harvey Weinstein scandal.

It is a short film by today's standards (1 hr 30 mins). It is also a minimalist depiction of office life as it can be. It is so realistic that it feels almost like a documentary, which is scary, on reflection... The scene in the office of the HR manager is, in my view, the climax of the movie, and is excellent. The rest, somehow, is a bit dull and repetitive, simply because office life -- for a junior assistant performing clerical tasks, which is what Jane is at the start of her career -- is never going to be exciting. The storyline is surprisingly linear.

It is a good film because it expresses a lot of deep emotions, while referring to profoundly uncomfortable realities in the world of work: shocking realities that can become routine and totally normalized. But the movie is so realistic that it is a bit flat. I would still recommend it.