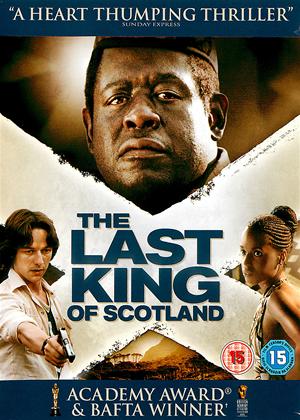 Rent other films like The Last King of Scotland

Reviews (7) of The Last King of Scotland

It tells the story of how the Ugandan dictator Idi Amin (Forrest Whitaker) came to power; and recruited a seemingly innocent young scottish doctor (James McAvoy) who had just finished his finals to become his personal physician. His physician becomes embroiled in his ruthless regime and strong arms tactics he often carries out on any and all opposition.

Forrest Whitaker perfectly emobies the brutality and paranoia of the man in what is the mosy oscar worthy performance of his career. James McAvoy, still an up and coming actor is perhaps even more brilliant; and should be doing big things in the near future The acting was uniformly strong if you haven't already seen it I strongly urge you to do so.

A compelling watch from start to end. James McAvoy's journey from naivity to despair reflects vividly the experience of many of Amin's citizens. A must see film with Forest Whitaker in a role that he performs admirably, reminded me somewhat of De Niro in Raging Bull in as much as he is immersed in the role and "becomes" the character. Perhaps some other political figures could see something of their own reflection in Amin's behaviour?

This film is everything you want in a gritty, shocking, real life drama! I'm not sure I can compare it to anything else I have seen, only to say that it takes you through a harrowing journey of lies, deciet and betrayal. You follow Nicholas Garrigan (James McAvoy)through what starts with a rather exciting journey travelling to work with Uganda and becoming personal physician to the President Armin. Anyone who has had the opportunity to work abroad or travel extensively will identify closely with the excitment of Nicholas's initial journey. But then it all turns rather grim as realtionships and politics get in the way!

I am not a fan of political films, but the story is sufficiantly juicy and the acting is so impressive, you cant help getting drawn into the drama. ONE OF MY TOP FIMS OF ALL TIME.

This tells the story of Idi Amin's regime in Uganda as seen through the eyes of a young Scottish Doctor. After graduating, Nick decides he wants to do something more interesting than be a family GP and, by chance, ends up in Uganda where he is helping charity medical workers. Nick soon gets snapped up by Amin as his personal physician, after being attracted to the glamour and wealth offered by the President. Nick soon realises he has made a mistake when he starts to see the cruelty inflicted on innocent people when Amin flies into one of his raging tempers. The film is graphic in showing atrocious acts of violence but it is never sensationalised. I can remember seeing some of these things on the news as a kid. What makes this film so special is the superb performances by all the actors and the wonderful direction of Kevin MacDonald. Forest Whitaker plays the part of a lifetime and is totally believable as the ferocious and seemingly insane Amin. Highly recommended.

the film is involving, the acting excellent, specialy forrest whitiker,deserved his oscar.

but wonder how much is 'true' and how much was dramatized to fit..

worth viewing, but honestly its overated,

One wonders how true much of this movie is - or the memoir it's based on. I suspect it's faction - so embellished truth.

Anyway, Idi Amin was a towering figure - he has appeared on screen before in RADI ON ENTEBBE and the recent ENTEBBE. A huge character who in the African leader tradition was brutal, tribal and merciless, and his thoughts never far from magic and with doctors.

I get tired in this movie of all the Scots nationalism, and the main character is annoying. Amin was not anti-British - he served the British loyally. I get tired of anti British esp antii English racism in movies these days. Worth remembering that the Scots were the most brutal and merciless slave traders in the 18th century.

Lush landscapes here and a genuinely interest study on hoe dictatorships happen. Same in all countries who have suffered them - Russia, Romania, all Islamic states, most African countries, far east states too, south America.

awesome forest - The Last King of Scotland review by jaysha

I had to re-wind some parts as it was so brilliant. Forest whitaker was brilliant and mesmerising. I did not know alot about idi amin just he was not a very nice man evil incarnate is my view now. The extras after the film were very informative and made the film even more powerful. I would reccommend everyone to watch this film. I loved it and knowing it was true made it mesmerising.