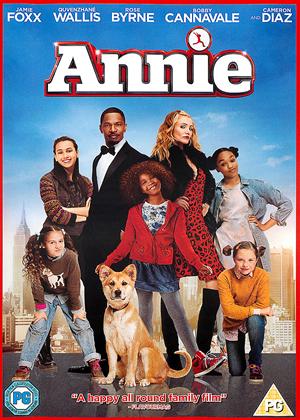 The latest interpretation of Annie takes the adorable singing orphan out of the Depression era orphanage and into the modern day foster home. Gone are red curls and rosy cheeks, replaced with the big hair of an African-American darling. The change in setting and character is enough to ruffle a few feathers for the many critics that hold the classic musical in such high regard. On a technical level, this is not a massive triumph over the original. But as far as remakes go, this 21st century Annie pulls enough originality and spirit out of its hat to standout on its own as a fun little musical.

The young Quvenzhane Wallis brings her own spunk and charisma to the title character. She hops and skips her way on the path to track down her parents, her upper lip ever stiffer when she continues to hit dead ends. Her nagging and despicable foster parent Ms. Hannigan (Cameron Diaz) stomps down her dreams, but never breaks Annie’s upbeat outlook. Luck is on her side when the cell phone mogul turned New York mayor candidate Will Stacks (Jamie Foxx) needs a face for his campaign. After rescuing Annie from a near collision with an oncoming car, the people-hating Stacks takes in the little girl for publicity. They’re both in on the deal and decide to work as business partners: he’ll win the election and she’ll be treated to the good life.

Similar to its source material, Annie takes up residence at Stack’s estate modernized into a penthouse suite. There are no scores of butlers waiting on her hand and foot, but there are plenty of automated computers and machines that bend to her every whim. It’s rather strange to see such a setting change as it feels more like Annie visiting the House of Tomorrow sans a creepy robot voice for her to interact with. The cold Mr. Stacks detests constant company and relishes the solitude of his abode. But with Annie taking up residence, his heart is sure to grow from some cute and smart child banter. She’s a terrible cook, but Stacks still admires her tenacity for whipping up meals. It’s enough to make him open only slightly when a sneaky kidnap scene is conspired against the girl of the hour.

The 21st century revision by director Will Gluck pulls out all the expected altercations. New songs are introduced to fit more with the story of a modern age foster child. The handful of returning songs are reformatted for the characters as when Annie sings the signature “Tomorrow” more as a tearful shred of optimism after being kicked down. As Annie grows more popular in the public eye, she’s established a Twitter page that becomes wildly successful and pre-programmed by Stacks’ staff. There are also plenty of updated references whereas Ms. Hannigan is stuck in the past about her short-lived career with C+C Music Factory (with the potential to join Hootie and the Blowfish). There’s even some strange references thrown in as Stacks’ evil adviser claims to have once helped Kim Jong-il rise to power (one of the few head-cocking bits that misfire).

In terms of the songs themselves, the new ones are not that memorable and not as well shot. While they do feature some perfectly timed actions, they’re almost all shown in quick shots rather than holding on a choreographed routine. When the girls of Hannigan’s apartment clean the place up, their song takes them all through the house, out the window and into the street. If held with longer shots, it would’ve been far more impressive. When Annie sings her first song in the Stacks’ suite, there is a lot of bolting around the area with a child services worker stumbling around in her dancing stupor. Hannigan’s “Little Girls” features some hallucinations of children acting as furniture, but it’s far more admirable for its effects than the song itself.

At two hours, Annie runs a little long as it milks its plot longer than expected and lacking in a handful of songs to keep things going. The good news is that the upbeat spirit of Annie remains true to its core. It may perhaps even be a little too sweet for its own good as it rarely takes aim at the current urban environment. But, for a family musical, it’s a pleasing bit of fun that never harps too much on the darkness which seems all too easy in these times. For all its smartphone insertions and Autotune-layered melodies, the smiles come more genuinely from such a light and bouncy presentation. It’s a solid little pick-me-up with numbers that may not stick in your head, but will certainly fill it with happy thoughts.