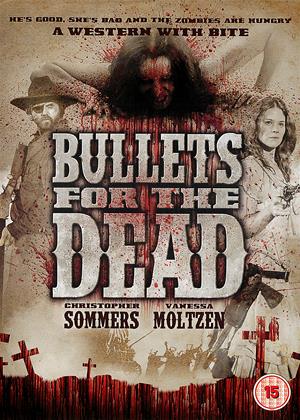 Reviews (1) of Bullets for the Dead

Spoilers follow ... - Bullets for the Dead review by NP

With opening scene and credits, it would be easy to believe this was going to be a light-hearted Australian western romp. And indeed it is, but it also involves swathes of the living dead, and a running time that contains more depth and drama than is immediately apparent.

1870, and a hardened bounty hunter James Dalton leads a troupe of outlaws and a preacher across the unforgiving, open stretches of land of the old west. The outlaws are a quickly likeable bunch of ne'er-do-wells lead by the formidable, beautiful Annie Blake (Vanessa Moltzen). For no readily apparent reason (although this is covered later in flashbacks), the crazed living dead frequent the freight train they were about to board and after that, things become frequently horrific.

Humour makes regular appearances, however, but it is not unsuccessful and doesn’t detract from the overall mood. For example, the group, who have learned to trust each other by this time, are transporting themselves across the wasteland via a carriage pulled by zombie nuns chasing a dangling limb just out of their reach! For all the waywardness of that image, there is an undeniable frisson to be had watching hordes of the rotting creatures approaching across the dust tracks.

Possibly my biggest issue with this is the lack of make-up for the zombies, which lessens a couple of jump-scares and plot twists. As one-eyed Dalton, Christopher Summers is adequate, but lacks the presence of many of his co-stars. He is consistently outshone by Moltzen, for example.