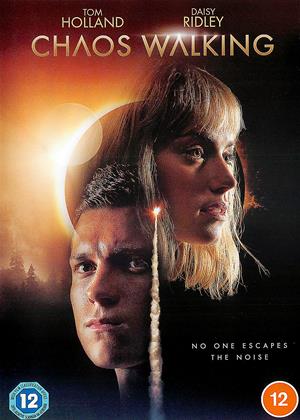 In a future settlement on a distant planet all the women have been killed off by the local species (The Spackle), leaving the men to die out. But hang on a minute, there’s another settlement with women just through the woods! Don’t laugh. Also, the men (but not the women) can hear each other’s thoughts and see them as wavy lines called The Noise. Don’t laugh. Then Daisy Ridley arrives by spaceship and finds a motorbike that enables her to be chased by men on horseback. Okay, you can laugh at that one. She and another Young Adult (Tom Holland) must now go on a journey through the woods to Farbranch so that they can bicker and get to know each other. Don’t yawn.

All this is based on a children’s novel that one hopes worked better on the page because the film is a complete mess. More interesting is a very revealing Making Of on the DVD Extras. Doug Liman, normally a reliable director, had no working script, had no idea how to tackle the subject matter and seemed to make everything up as he went along. It shows.

The only thing that amazed me about this film is how all the actors in it manage to keep a straight face while speaking their absurd lines.

The wonderful Mads Mikkelsen phones it in no doubt thinking of the pay cheque. Tom Holland is clear eye candy for the expected teen audience, no doubt - used as much as any starlet of old Hollywood was. Apparently, that hypocrisy is just fine in the new woke world of metoo.

This is based on highly acclaimed YA books by Patrick Ness - a massively over-rated author and darling of the pc publishing scene. But the whole concept of the plot is sexist - against men. Pure misandry - claiming what this story claims. No spoilers. But if you could not read someone's thoughts, is it realistic to expect you would murder them all? All the fault or the book not the film - as are the 'Spackle'. What a limp name for an 'alien' species. Sounds Spangles, the kids; sweets. Maybe Patrick Ness was eating one and his genius imagination came up with it. No wonder the book won awards eh?

This film is confusing, silly, illogical and ticks all the pc boxes - if #MeToo had made a sci-fi movie, it'd look like this mess.

It cost $100 million to make and made $25 million only, so a massive flop. It had a script from 2011 rewritten multiple times with poor test screenings leading to more rewrites and shoots. Just so people know what a mess to expect.

I am only giving this 2 stars not 1 because the special effects of the 'noise' are done well, and the soundtrack music is decent so 1.5 stars rounded up. Not good.

Did not really know what to expect with this film as to be honest we pick films based upon reviews being better than 50%, it lets us see films that we would not, based upon the title, really look at. To be honest some we get we stop watching but most are good some however are outstanding and this is one of them. It has a simple plot, settlers in the future are on a new planet that something about it causes peoples thoughts to be totally visible to all, unless you are female. Which for some reason that takes up a good part of the film, there are non until one survives a crash landing. The story covers her fight for survival, So I suggest you take the time its a good one!

Based on a YA novel, Chaos Walking at least has an interesting edge to explore in the exhausted subgenre of Young Adult Dystopian tales. The colonization of a new world for mankind occurs in waves, where the first wave has settled as colonists with a pioneering edge. The oddest thing about the planet is that all the men have their thoughts materialize as sight and sound with some mysterious force called The Noise. That’s a pretty interesting idea but such a film only manages to scrape the bare minimum of this rather interesting scenario.

On the planet, we follow Todd Hewitt (Tom Holland), a young man who has only ever known life on this new world. Having grown up with the Noise, he struggles to maintain it. Others have been able to master it to a certain degree, where the mayor (Mads Mikkelsen) has managed to focus his energies on hiding his thoughts and depicting illusions. Todd finds himself easily distracted as an unsure young adult, desperate to maintain his noise by repeating the words “I am Todd Hewitt.” His farm life does little to shake this uneasiness.

The planet has just received an arrival as a space shuttle crash lands in Todd’s territory. The only survivor is Viola (Daisy Ridley), a young woman who finds herself perplexed and frightened by an all-male community with transparent thoughts. Given that Todd has never seen a woman before, he’s overwhelmed with emotions and unsure how to respond. He’s also not sure who to trust when the mayor wants to keep her contained for undisclosed reasons.

Todd’s adventure to keep Viola safe finds him struggling to comprehend the world he occupies and the identity of being a man. It’s an intriguing aspect that is worth exploring, tapping more into the fears that young men have about growing up and trying to prove themself. Todd’s Noise constantly finds him seeking ways to show off to others that he is more of a man than a boy. It’s just a shame that there isn’t a whole lot more to his character besides seeking truth and worth through pathos most routine. The same goes for Viola who finds herself as more of a basic audience surrogate than someone with an arc.

The setting is at least quite pleasing. The new world is treated with a pioneering edge, where villages center around old-fashioned agricultural methods, horseback travel, and hunting with rifles and knives. There’s a great western setting to this swampy planet of fields, rivers, and forests. It’s a location that also looks good when posed next to down starships that enter and crash on the planet.

The concept of the Noise, however, feels as though there’s whole lore more worth exploring. Consider the Priest of Todd’s collective, a man who is conflicted by his own sins that his Noise seems to only speak of religious anger. A lot of the thoughts of the men communicated by the Noise are also rather base. They ask basic questions, make predictable reactions, and dream about baseball. It just seems like this would be an ample opportunity to display how men have thoughts that don’t about as easily come about in verbal conversations.

Chaos Walking really only feels like it’s a fraction of the YA dystopian tale it could have been. The concept is solid but the story spends so much time meandering around lesser moments that hardly make the setting any more interesting than on its basic levels. If only such a picture could see through its own Noise to present more clearer than a standard adventure of Holland and Ridley.