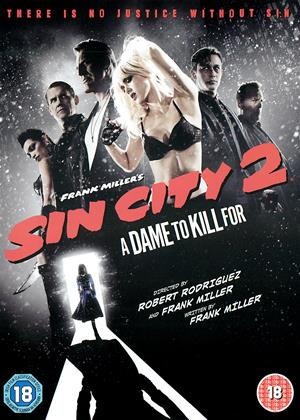 Rent other films like Sin City: A Dame to Kill For

As good as the 1st - Sin City: A Dame to Kill For review by PT

If you enjoyed the first film, rent it, simple as.

All the old characters are back, Mickey Rourke more violent and crazier than ever, Powers Boothe even more evil, Jeseca Alba in great vengeful mood, etc. Also a brilliant role from Eva Green, one enchanting, scarey femme fatale, a "dame to kill for" from the title.

'I was born at night. But not last night.' - Sin City: A Dame to Kill For review by AS

Not quite as good as the first outing: the storylines are a tad ordinary and drag on too long; some of the violence is gratuitous; some of the action has become tongue-in-cheek, losing the hard edge of the original 'Sin City'. That said, the cast do a brilliant job of fitting into Frank Miller's noir city and the graphics alone are worth the trip. Razor-sharp dialogue and indeed dames to die for.

Sin City: A Dame to Kill For review by Mark McPherson - Cinema Paradiso

In 2005, Robert Rodriguez amazed the action going audiences with his bold and flashy adaptation of Frank Miller’s Sin City graphic novel. It pushed the comic book style with an impressive all computer generated environment and a heavy pulp appeal. Nine years later, Rodriguez and Miller return to their metropolis of sex and violence once more with A Dame to Kill. This is a welcoming return to form for both directors after Rodriguez’ far-too-over-the-top Machete Kills and Frank Miller’s far-too-ridiculous rendition of The Spirit. They don’t exactly recreate or outdo themselves with the world they created so long ago, but they do maintain it’s lush visual appeal and the savage grit which made it so notable in the first place.

Similar to the first film, this is indeed another anthology of overlapping stories, but not an entirely original collection that takes the gritty tales in a different direction. Instead we’re treated to a series of prequels, side-stories and sequels to the various characters of the first film. We see a younger Dwight (now played by Josh Brolin) running and gunning around town as a detective. We see a bitter and battered Nancy (Jessica Alba) seeking revenge on Senator Roark (Powers Boothe) for his corrupt reign that took away the only cop that protected her. And we get to see the big and burly Marv (Mickey Rourke) roam the streets and alleyways for trouble.

The only segment not directly related to the original Sin City comics is The Long Bad Night. The story follows Johnny (Joseph Gordon Levitt), a cocky gambler who bites off more than he can chew in a poker game with Senator Roark. Johnny can beat him at cards, but Roark can beat him with a gun. After losing his best girl to the sore loser, Johnny works his way back into the dark poker room for another round to humiliate Roark one more time to prove it was not just a fluke. This is one of the few stories that was written specifically for this movie and I was very pleased to see it presented here in two parts.

Immediately there’s a lack of tension with most of the stories as we know for the most part what is going to happen to these characters, as is the problem with any prequel. But what ultimately lifts the film out of these pitfalls is the fantastic cast assembled for this macho comic book noir. They’re given a shot at the same type of stories where one protagonist goes on a crusade to either blow some brains out or protect a dame with a truckload of self-narration over every scene. They’re clearly having a ball with such outlandish roles in a cartoonishly gruesome comic book world and it translates well to the screen. Seeing some of these actors like Mickey Rourke, Powers Boothe and Bruce Willis reprise these roles was a pleasant reminder of how engaging the 2005 film made me feel in the theater. These are great actors putting their all into a campy romp through a bloody playground of familiar stories.

But with so much time having passed since the original, one may wonder if the novelty wore off especially since Frank Miller attempted a similar style with 2008’s The Spirit. I must admit that there isn’t much new here as A Dame to Kill For treads down the same path as the original, flash and all. The city still looks like the same darkened graphic, the violence is still a fast wash of white blood and the general tone is maintained with characters cracking wise in the face of almost comical gore. Most notably is that the stories themselves are not as punchy not just for the overly-familiar characters, but for the uneven tone. Several of these stories feel like they end far too abruptly on a rather sharp note where you feel like a reel was missing.

That being said, Sin City: A Dame to Kill For still delivers on its promise for everything the original set out to accomplish. Needless to say, if you didn’t dig Sin City, you’re certainly not going to find anything in A Dame to Kill For to change your mind. It’s just as brutally unapologetic about its hyper-stylized world of sensational noir and often silly levels of violence. I find it rather surprising how other critics found themselves bored and tired by Rodriguez’ style having seen it all before. My reaction was the exact opposite. I have not seen a film quite like Sin City in a very long time and was rather excited to make another return to the giddy urban landscape of vigilantes, gangsters, corrupt politicians and bitterly vicious prostitutes. A Dame to Kill For may not pack as heavy a punch as its predecessor, but it still manages to knock out a few teeth.