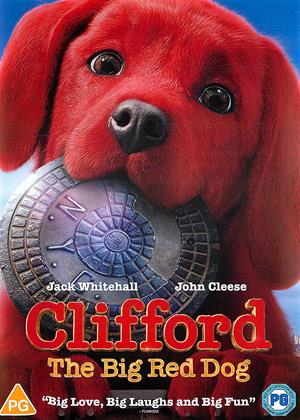 Clifford is one of those kids films that feels like they took the same story used many times before and added Clifford the red dog in. Sadly its not funny and not really that engaging. It plods along without adding anything new to the party.

The children’s books of Clifford are perfectly suited for the young reader. With the titular big red dog getting into all sorts of adventures and mishaps, the simple story structure was ideal for either kid just starting to read or parents finding a brief bedtime story. Perhaps a hopeful part of myself wanted this live-action movie to be just as simple and sweet as the books where Clifford saved people from burning buildings and helped out with parades. It’s not impossible, considering Paddington was such a treat of a picture.

Sadly, Clifford comes about as standard as any dog movie could be. You’ve got all the hallmarks of a rainy-day, direct-to-video snoozer. There’s a cute red dog who does cute dog things, albeit through some stumbling compositing of an all-CGI creature. There’s the key kid character of Emily Elizabeth Howard (Darby Camp) but she’s posed more as a down-on-her-luck girl who could really use a big furry friend to help with her absent parent. There’s the goofy and clumsy uncle Casey (Jack Whitehall) who struggled to figure out what to do with both Emily and Clifford once he becomes the biggest dog in the city. There’s also the evil owner of a genetics company played by Tony Hale who wants to kidnap the dog for his own experiments. All pretty standard stuff.

The film is only at its best when diced up into the small vignettes of Clifford doing silly things with his size. He plays with giant objects in the park and confounds a cautious veterinarian played by Kenan Thompson. These bits are great because they’re a lot like the books which meander in just finding neat stuff for the dog to do about town. It’s only when the film tries to stick to the plot of trying to rescue Clifford from the clutches of a ridiculous antagonist that the film becomes a snooze. The visual gags are decent but do little to offset the bare-bones template of so many other dog movies. The genetics owner isn’t even that crazy; just the usual amount of stumbling and bumbling from that eccentric Tony Hale. Remember how in the film Beethoven the villain was some gun dealer who wants to test his guns on dogs? That was wild.

But, yes, Clifford is most likely going to be aimed at the younger crowd so it’s best not to bring in such darkness. That being said, it doesn’t mean the film has to be devoid of wit. Remember the Paddington movies? The first film still had one of those mad scientist villains and still managed to be a sweet and compelling comedy fit for the whole family. Paddington 2 only improved on that format. I could watch that film a hundred times. With Clifford, one may be enough.

I say this only because the magic of Clifford is called too much into question. We’re led to believe by a kindly animal keeper played by John Cleese that Clifford is a work of magic. But then that magic is cracked a bit when considering the genetics of Clifford. Why even bring it up? All it does is make one think more about how much food Clifford would eat and how big his poops would be. Do I really want to think about the girth of a giant puppy’s fecal matter in a tepid family film?

I don’t want to dog on the Clifford movie. I’m sure some kids will dig its appeal of slapstick and the very sight of a big puppy getting into trouble around New York City. And, hey, maybe the film will get the younger kids even more interested in reading the books. The books themselves are great for first-time readers with plenty of fun illustrations and silly scenes. They don’t feature a mad scientist trying to capture and experiment with Clifford but I think the young readers will be fine with this absence.