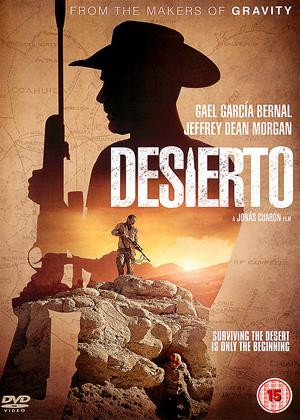 Terrific chase movie that plays like Terminator 2’s T-1000 cyborg chasing Bear Grylls in the hot desert. Rabbit hunter Jeffrey Dean Morgan is out to stop the unjustly deported Gael Garcia Bernal and his fellow Mexicans from illegally entering the States. Even as we root for on-the-run Bernal, Morgan brings to the screen the same charismatic presence that bewitched The Good Wife on television. He’s impossible to dislike, even when he’s picking off Bernal’s party with his high-powered rifle.

A lesser film would wallow in moral judgements and intersperse the action with boring backstory, but Desierto just gets on with it and let’s us thrill to a classic cat-and-mouse chase. Director Jonas Cuaron, following impressively in the footsteps of his father Alfonso (Gravity) directs flawlessly, making the most of the big wide landscapes: rocks, canyons, playas, cacti… And the percussive score by Woodkid provides rousing support.

Ignore American reviews that overload the film with political symbolism. At a mean, lean 84 minutes it’s as impressive a master class as Duel in showing how to make an unrelenting thriller. The only downside is a mawkish end-titles song. Also: avoid the tell-tale trailer.

Not bad, predictable in places, but stretches credibility like the abilities of the bad guy which fail him at key moments. No time to develop character which would have been good. Enjoyable enough.