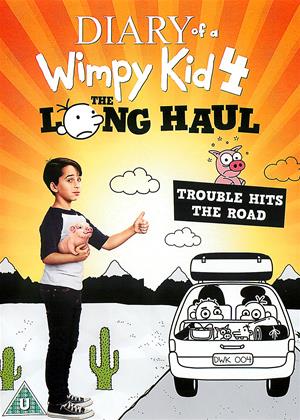 Rent other films like Diary of a Wimpy Kid: The Long Haul

Sign up
Diary of a Wimpy Kid 2: Rodrick Rules

Reviews of Diary of a Wimpy Kid: The Long Haul

“If there’s one thing I’ve learned from my years of being a kid, it’s that you have zero control over your life.” -Greg Hefley, a wimpy kid.

I share the helplessness of Greg Hefley, an unfortunate boy who finds himself trapped in the hell of a family road trip movie. It is an ugly world he occupies of exaggeration. Every baby is a filthy mess covered in food and poop, their diapers casually flung through the air and laughed at when lodged onto someone’s flesh. Every fat bearded man you meet on the road is a crazy psychopath that will chase you to the ends of the Earth, presumably to beat you up. Every small motel is seedy dive of giant bugs, damp towels and filthy pools. Everything is a disappointment and everything is gross. But isn’t it funny that Greg stuck his hand in baby poop?

It’s apparently hysterical to a group of parents that decide to film his reaction with cackles and post it online. Now poor Greg is an internet meme that is constantly mocked by all his classmates and the world at large. How can poor Greg clear his name? Well, he could just wait it out as internet memes have a limited lifespan and will die out. But, no, that’s not worthy for an adventure! Greg reasons that the only way to not be seen as a dork is to appear in a YouTube video alongside his Let’s Player idol, Digby, a tubby idiot that plays video games for money. What a role model! But how to get to Digby? Well, it just so happens that he’ll be at a video game convention that is close enough to Greg’s grandma’s house where his family is headed towards on a long road trip. How convenient. Good thing mom and dad don't check the GPS so that Greg can divert them.

Does this plot sound familiar? You may have seen it in National Lampoon’s Vacation, RV or A Goofy Movie. But I’ll bet you’ve never seen it drowned in every cliche of the road trip genre or every foul bodily function/fluid/solid touted for low-brow laughs. There’s no surprise to it either, telegraphing the jokes long in advance so none of the shocking humors comes as much of a shock. The car gets stuck in the mud and the whole family except for the driving dad exit the car. The family outside the vehicle is perfectly placed to observe the skidding tires kick up mud all over them. What an unfortunate development. Events become all the more random to make way for more gross out gags. Why does Greg’s teenage dolt of a brother Rodnick consume four sticks of fried butter at a fair? Obviously so he can puke it all out on a ride. Expected, but more shocking for how long the movie displays his vomit with computer animation in slow-motion. I have to wonder how much of the effects budget was placed on this one scene.

Even I could swallow all the poop, vomit and urine that was chucked at the screen, the movie is still an unfocused mess of a movie which has more payoff in tired gags than characters. The old road trip trope of dad working while on vacation is applied, but never dealt with past two scenes. I guess dad’s job really wasn’t in trouble since the movie forgot all about it. Roderick needs money for his van. Could he find it on this trip? Nope, mom and dad will just give it to him off screen. And what of poor Greg’s internet status? Hey, what do you know, it went away on its own. It’s as if the entire family vacation was a futile exercise in bonding.

Don’t be fooled by the presence of family bonding, however. This is a kid’s movie, not a family movie, where kids are entertained while the adults are bored. And yet I sat at a preview screening where every parent seemed to be yucking up all the filthy and overused antics of Greg’s family going on a crazy road trip. As a parent myself, I had to wonder if the mother of four sitting next to me had either gone crazy to find such material funny or was relating more to the sight of bodily fluids with a knowing nod as if the movie was made for her. I could recommend it for parents on that merit, but, as a parent myself, I still found myself repulsed by the experience, even when shrinking down my expectations to the level of a small child. Small kids deserve better and so did that mom, but I guess when you’re a mother of four, any chance to watch someone else become covered in mud and touch baby poop is probably a hysterical riot. I pray I never reach this level of hysteria, which I should be safe from if I don’t have four kids.