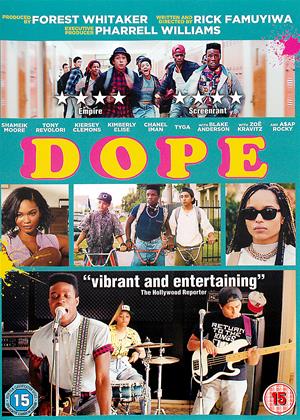 Comedy/Drama/Romance/Twist/Serious - Goodish film but needs to make its mind up... - Dope review by EP

The film starts brightly, the likeable main characters being obsessed with retro hip-hop and some funny scenes and feels like House Party Kid and Play if anyone remembers that, it all gets quite similar to the series Snowfall for the middle section i.e. young nerdy guy gets tough with drug/gang people and there are some good actions scenes a bit like Crank and then will he get the girl scenes but then it gets political towards the end and although I see what the message is (no spoilers!), I fast forwarded the end a bit as I really set out to watch a high school comedy which this film kind of achieves for the most part.

Well made and acted film with good comedy drama sections but a serious message at the end. Overall it needs to make its mind up what it actually wants to be, but original, not bad at all and there is a twist 3/4s of the way through which I enjoyed.

Dope exists as a very different coming-of-age tale both unique and strange. Upon first glance, I thought the movie took place in 1990’s Los Angeles with the presence of clothing, hair and accessories from that decade. As it turns out these are only elements of high school kids that adore the 1990’s. Black and latino, they are the new nerds of the 21st century with their stellar grades and outsider mentality, doomed to the issues of inner-city life. But what could have been a new and smart take on Revenge of the Nerds ends up being a bit of a mess in trying to say and do too much.

Our plucky protagonist is high school student Malcolm (Shameik Moore), a flat-top kid who appreciates old school hip hop and favors writing school papers about Ice Cube’s “Today Was A Good Day”. He’s an exceptionally smart kid who has dreams of Harvard, but everyone, including his school advisors, believe it to be a hopeless dream. School cops don’t take him seriously and drug dealers push him around. And, yet, Malcolm continues to push on with his nerdy friends and their band of oddly uplifting and explicit lyrics. They are an odd lot.

And the plot is even odder. Malcolm becomes mixed up in a violent drug deal gone wrong. The prospect of having sex with a woman apparently makes him willing to throw himself into parties of drugs, gang violence and the potential of being arrested. His goals than shift between making out with the hottest women of the gangster life, making it into college and selling drugs off on the online black market. Somehow all of this culminates into a message about racism and classism with an ending that comes off more cynically sad than cleverly wise.

The picture almost comes off as a millennial twist on Revenge of the Nerds and Porky’s, almost as if it were a parody of placing a politically correct vibe on 80’s comedy. But then the movie becomes more stylistically action-oriented when real gang violence breaks out with bloody gunfights. Death is treated as a more common ordeal as the picture opens with a nerd meeting his end and the other nerds attempting to woo his mother for his comic book collection. And then there are more stylistic choice of rewinding events from different angles, wild drug-fueled sex, music-making montages and a corporate hostage negotiation of ill-gotten gains in the form of bitcoins. This movie refuses to be defined or pick a tone. Maybe it doesn’t want to, seeing itself as a defiant outsider and rebel of the teen movies.

Thankfully, Dope has charm in its smattering of characters. It’s hard not to root for Malcolm as he struggles to use his head while keeping it low enough to not get killed. When presented with a terrible situation, he makes the intelligent decisions to work through it. He has the courage and determination to turn a bag full of drugs into his ticket to college. He can talk the talk and walk the walk when dealing with everything some seedy dealers to corporate manipulators. I also dug his band of nerd warriors that include a wisecracking latino, a quick-witted black lesbian and a curly-haired white stoner.

Dope is hard to pin down in its tone, harder to follow in its progression and nearly impossible to comprehend its character motivations. The likability is fairly high with characters you want to succeed, but at what I’m not entirely sure. Should Malcolm’s music group take off or should he excel at Harvard in an undisclosed profession? Should he become an expert drug dealer or major in corporate finance? Even the grand finale of his college goals are kept vague as a challenge to the audience. I really do like the pluck and charisma of Dope, but I still found it frustrating how it couldn’t decide on one of the five movies it was trying to be.